Prime Minister Benjamin Netanyahu has called Israel's ambassador in Nepal, Yaron Meir, in the wake of a magnitude 7.3 earthquake which struck Nepal on Tuesday, originally confirmed by the the U.S. Geological Survey.

Forty-two deaths have been confirmed by an international agency along with 981 wounded and the tremors caused people to run out of buildings in the capital Kathmandu and shook structures in the Indian capital.

Netanyahu is reportedly receiving updates on the situation in the region. Israel's aid team which helped save lives after an earthquake in April that devestated Nepal, landed back in Israel Tuesday morning just hourse before the new earthquake.

Local rush outside an airport.
X

Local rush outside an airport.

Despite the disasters that occurred only a few weeks ago, there were still Israeli travelers in Nepal. Shai Giron of Ness Ziona has been in the country for a month and a half. Speaking to Ynet on the phone, he described the fresh disaster.
"I was with some friends in a restaurant in Thamel, in Kathmandu, and suddenly the whole earth shook and things fell on the floor," he said. "We went outside and ran towards the Chabad House. I was on a trek during the last earthquake and now there were many people around me. The locals immediately closed the stores and ran home, and they're hysterical."

The quake, which struck near the base camp of Mount Everest, was measured at a shallow depth of about 10 km. A 7.8-magnitude earthquake struck on April 25, killing at least 8,046 people and injuring more than 17,800. 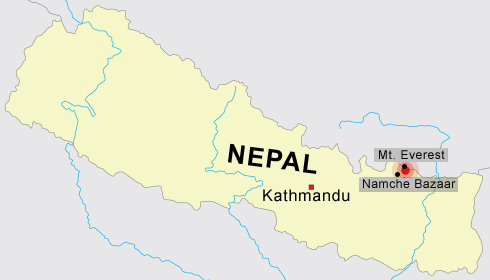 The epicenter was located near Namche Bazaar in eastern Nepal.
,

IsraAID said in a press release that it currently has medical and psychosocial teams on the ground in Nepal. The organization said that they are distributing goods and will continue to coordinate with the Nepalese government, UN agencies, and NGOs/INGOs to respond to any and all new developments.

"This is a really big one," said Prakash Shilpakar, the owner of a handicrafts shop in Kathmandu who was trying to call his parents in the town of Bhaktapur, devastated in the April 25 quake.

The Nepalese police tweeted that the public should remain in open areas, clear the roads for emergency crews, and to refrain from making phone calls as the networks were busy.

Aftershocks have been felt in north India and the capital of New Delhi following the quake which occurred about 68 kilometers west of  Namche Bazaar next to the base of Mount Everest.

The quake's epicenter was close to Everest Base Camp, which was evacuated after an avalanche triggered by the April 25 quake killed 18 climbers. Mountaineers seeking to scale the world's tallest peak have called off this year's Everest season.