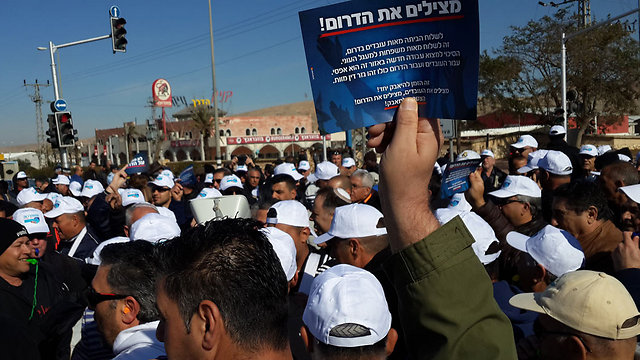 Dimona will 'shut down' to protest mass layoffs, mayor vows

Extensive job cuts at Israel Chemicals has left city residents fearing for the future; one-day shutdown has support across political spectrum, will include closure of schools, demonstration in solidarity with workers facing dismissal.

Economic distress and fear of unemployment are not the woes of merely a handful of families or certain streets and neighborhoods in Dimona; they are a serious concern for all residents of the Negev city. Now, on the brink of the abyss, they are coming together as one – all of Dimona for the sake of Dimona.

The fate of one in every five households in Dimona is tightly linked to the Israel Chemicals Ltd. (ICL) plants in the south. And with no end in sight to the strike at the ICL operations, and mass layoffs just around the corner at other plants, the 40,000 residents of the city clearly realize that barring any significant changes, they are heading for a very bleak future.

The dire situation has prompted Dimona Mayor Beni Bitton to declare a one-day shutdown of the city, including its middle and high schools, on Sunday. The citywide protest will also include mass demonstration at the entrance to Dimona in solidarity with the workers whose jobs are under threat. Bitton has the support of all the political parties in the city council.

"All of Dimona will be shut down," Bitton declared at an emergency council meeting, which was also attended by around 1,000 ICL and Meteor employees who are facing layoffs. "We've made a tough decision; but we are like a fist and we support the workers all the way."

The labor dispute at the ICL plants in the south – Dead Sea Works and Bromine Compounds – has been ongoing now for three months, and may yet end in the dismissal of hundreds of workers, many of whom are Dimona residents. Furthermore, layoffs hanging over the head of the 60 employees at the city's Meteor plant have led to another labor dispute and more concerns.

Bitton then placed the ball in the court of incoming Finance Minister Moshe Kahlon. "The responsibility rests first and foremost with the government of Israel and the new finance minister, Moshe Kahlon," the mayor said, calling on the state to intervene financially to prevent the dismissals. "I called Kahlon and said to him: 'You are a social-minded minister, connected to the people, you revolutionized the cellular market; now's the time to make a small revolution for us."

Dead Sea Works employee Avi said that all the plant's workers would be attending the demonstration. "We will make sure that everyone comes to demonstrate on Sunday, and we will convey the message that the Negev and Dimona must be cared for," Avi said. "We, the ICL employees, are in danger of losing our jobs because our management pays out billions in royalties, while the workers earn NIS 8,000 a month."

Erez, 54, also from Dimona, called on the government to intervene. "Forty-two percent of the Dimona residents voted Likud in the last election because Prime Minister Benjamin Netanyahu assured us he would take care of the problem," Erez said.

"Netanyahu promised to resolve the crisis after the election because he wasn't able to deal with it before then. Now, with the crisis still ongoing, it's time to take off the gloves."