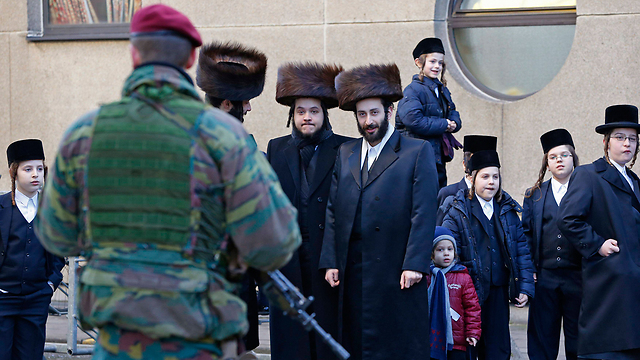 European Parliament VP: There is no Europe without Jews

As emigration to Israel surges in wake of anti-Semitic attacks, Antonio Tajani tells Jewish community that Europe needs Jews and education must be overhauled to teach young people about religious freedom.

European Parliament Vice President Antonio Tajani has called on Jews to remain in Europe, following a surge in immigration to Israel in the wake of anti-Semitic violence.

Speaking last week at a meeting of the Conference of European Rabbis in Toulouse, Tajani said that "Europe has Jewish roots, and the Jews are a substantial part of the history of the continent." He added that Judaism and Christianity were both part of his heritage as a European. "We need Jews in Europe," he said. "Europe is also your heritage.

Soldier guarding synagogue in Belgium after anti-terror raid in January (Photo: Reuters)
"No Jew should feel compelled to leave Europe. It is our duty to allow Jews to stay here, using all of the tools at our disposal. The Jews of Europe are part of the family of nations that led to our continent's prosperity. There is no Europe without Jews.

The vice president, who visited two Jewish schools in France, said education is an essential component of maintaining a free, democratic Europe.

"I told them that the institution they study in has a central part in protecting our values," he said. "Our goal is to develop a society in which everyone can live freely and securely. Schools should fight against all extremism, and I will do everything in my power so that schools educate people to live according to democratic principles."

He emphasized that Europe is not only an economic partnership, but has a responsibility to develop a society based on brotherhood and unity.

"Education is imperative," said Tajani. "If we want to change Europe, we have to change education – and this is critical. The young people I met at the Jewish schools said the solution is dialogue between people and religions, and it's important that this begin in school.

"It's a dream," he said, "but without a dream – there is no chance of defeating anti-Semitism. If we are all share a common dream, we can build a new future for you. We all share this tradition. We want you in Europe."

Tajani emphasized that "Islam is not terror. I have nothing against Palestinians, but I have everything against terrorism."

He noted that alongside educating Europe's youth on democracy and religious freedom, international intelligence services should unite to monitor what he called "the global network of terrorists, who are in Europe today and in Syria tomorrow." He added that the European Union works to combat anti-Semitism on online social networks as well.