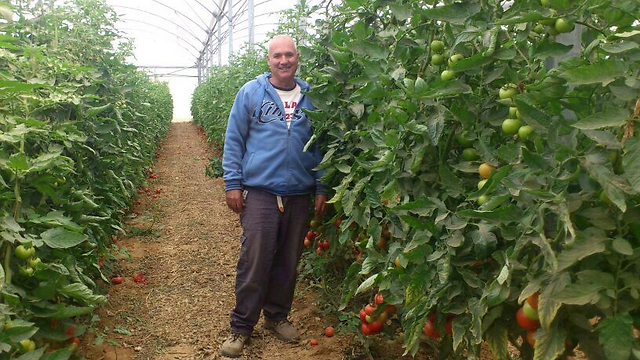 The tough agricultural conditions in Israel forced its people to find innovative ways to farm, which could help deal with ever-increasing global demand for food.

Ten billion people. That is the number of mouths that farmers will have to feed in another two decades. In order to do this food production needs to increase by 70 percent.

“In recent years, due to the over usage of soils there are more problems with insects and diseases. At the same time, there is increased regulation on the usage of chemicals,” Yuval Fradkin, the head of Futura Graft told The Media Line. “(Modern) requirements lead to a point where you ask the plant to be some kind of super plant. On the one hand you ask it to provide the needs of the farmer and the market. At the same time you ask the plant to fight all the other problems in order to grow.”

Futura Graft were one of twelve companies speaking at a recent conference called Agrivest, offering new technologies for agriculture. Futura Graft’s solution to the twin conundrums of increased food production and simultaneous reduction of the usage of harmful pesticides, is the application of robotics to an existing technique known as grafting. Grafting involves taking the roots from one plant and fusing them with the green stalk, or scion, of another, giving the plant the properties of both.

“This is not something that we invented. The Chinese used to do it thousands of years ago,” Fradkin points out. What Futura Graft are offering which is new is a reduction in the time spent grafting the rootstock to the scion, a process which is time consuming and requires numerous workers. “We are just taking (grafting) and making it more advanced, with the ability to deal with more problems than they used to do in traditional grafting.”

This will benefit “the population of the world, food production in general,” says Fradkin. If humanity is going to feed an additional 2.3 billion people by the half way point of this century, then new solutions are likely to be necessary.

But increasing the amount of food that mankind could produce was not the only salvation on offer at AgriVest 2015. “Imagine sugar which is twice as sweet as sugar – that is what Doux Matok offers,” said Eran Baniel, in a slight French accent, as he addressed the audience during the conference.

Seeking to help curb the rise of diabetes and obesity, two health problems which health professionals have warned are looming health crises in the West, the startup offered to reduce the amount of sugar consumers ate by “cheating their taste receptors” into believing a food was twice as sweet as it actually was.

Doux Matok’s solution was based in chemistry. Futura Graft’s in plant cultivation and robotics. Among other startups at the conference were solutions based in data analysis, water filtration, remote sensors, biological cultivation and new techniques for food packaging. Each of the companies was hoping to gain exposure through the conference and attract new investors. Although solutions to the problems of the future were much in discussion, equally important at the conference was money and business potential.

As Baniel said, if you “make wonderful things which are (too) expensive, you’ll get compliments but no business.”

Keen to attract money which could be channeled into additional research and development or the patenting of additional lucrative intellectual property rights, Baniel added, “We all talk billions, but in the food and beverage industry it is billions.”

The importance of placing business at the forefront of agri-tech development was acknowledged by Oded Distil, Director of Israel New Tech and Invest in Israel, a branch of the Ministry of Economy.

“At the end of the day it has to be based on pure business rational, otherwise it doesn’t work,” Oded told The Media Line.

But he was keen to stress the variables which were behind that rational: the need to grow more food; the requirement to use resources – “land, water, whatever” – more efficiently; and the necessity to reduce the amount of damaging chemicals and pesticides being applied in agriculture.

“The concept and mindset is an extremely important factor that has to go all the way from the consumer to the supplier to the multinational and all the way down to the farmer – everyone has to get the new vision of how things have to be done.”

Although the conference had an international flavor the strength of Israeli ventures amongst the startups, was apparent. “A lot of it comes from our DNA – (in the past) we had to come up with solutions to certain problems… So you would find that throughout the years always we had innovation in this sector,” Oded said.

Israel’s tradition of agriculture in a tough environment and the success of its high-tech industry give it an advantage in the growing agri-tech industry. “You’ve got a lot of international interest in this conference because Israel is in this game and… has been for many years.”

“This comes down to the ever recurring question of the startup nation,” believes Oskar Laufer, from Phenome Networks, a data analysis firm which specializes in precision agriculture.

“There are a few well known factors which contributed to this: the availability of adventure capital; the large influx of (educated) Russian immigrants in the 90s; (the) culture of entrepreneurial spirit; the army - there is a lot of people who are developing technology in the army… a whole generation of people developing technology.”

This, he explains, blends well with the founding Zionists’ focus on agriculture. “Israel started with very tough agricultural circumstances – not a lot of water, a lot of desert, swamps here a hundred years ago – so the people who lived here were forced to be very inventive.”