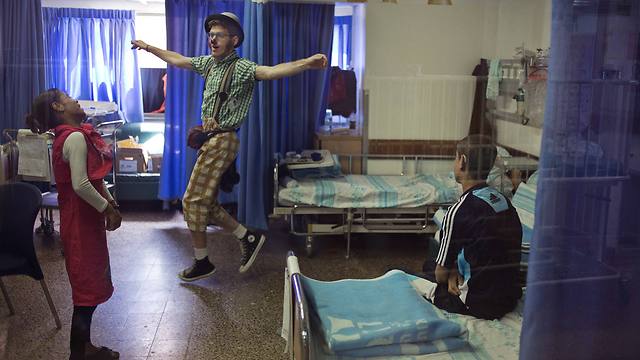 Teenage siblings Ahmed and Hadeel have been regular visitors to a Haifa hospital for three years, receiving dialysis that keeps them both alive.

This is where the Gaza teenagers spend 12 hours a day connected to dialysis machines. These contraptions -- and their hopes for a better life -- come from a surprising source: an Israeli hospital.

Israel considers the Hamas-ruled Gaza Strip to be a hostile entity, and it has maintained a blockade over the seaside territory -- and fought three wars -- since the Islamic militant group seized power in 2007. At the same time, it also allows thousands of Gazans to travel each year to hospitals in Israel. This awkward arrangement, which sometimes includes security interrogations, highlights how after years of hostility, the fates of Israel and Gaza are deeply intertwined.

The Hamdan siblings, Ahmed 18, and his sister Hadeel, 15, have been regular guests at the Rambam Health Care Campus in Haifa since July 2012. The children were initially treated in hospitals in Gaza, Egypt and Syria before receiving a medical referral to Rambam. That first lasted three months. The hospital would not let them go back to Gaza until Hadeel was able to walk again after being incapacitated for a month. "I thank them very much because they exerted tireless effort, especially with the girl," their mother, Manal, said. Since then, doctors said a special treatment called automated peritoneal dialysis was the only way to keep the children alive, pending a kidney transplant. Without any machines or technicians in Gaza, Rambam worked with Palestinian officials to get the equipment installed at the family's home and trained their mother how to operate the machines. "From here, we call them and they follow with us step by step," Manal said. On a recent afternoon, she put a medical mask over her black veil and on the children's faces, sterilized everything in the room, connected the tubes into the children's bellies and pressed the buttons of the machines. The 12-hour session had begun. With only eight hours of electricity a day, and four other children, the family relies on a generator from a nearby Palestinian medical facility to power the machines.

Ahmed and Hadeel enjoy some light entertainment at Rambam (Photo: AP)
Their mother said it is "boring and exhausting" to stay at home to care for the children, but she is grateful they are alive. She said the hospital makes sure that solutions and medical supplies are delivered to the family on regular basis. Earlier this month, the Hamdan family returned to Israel with their 40-year-old aunt Najlaa, who is donating a kidney to her nephew Ahmed. "Every time I see him connected to dialysis, my heart tears apart," the aunt said. The Israeli defense body responsible for Palestinian civilian affairs, Cogat, said it granted roughly 27,000 medical permits for Gazans to travel to care in Israel, Palestinian hospitals in the West Bank and east Jerusalem or in neighboring Jordan. That number includes patients and relatives allowed to join them. Among those treated in Israel last year was Hatem Moussa, an AP photographer critically wounded in an explosion during last year's war between Israel and Gaza militants. Cogat had no specific breakdowns on the patients' final destinations, but a World Health Organization report said 3,840 Gazans were treated in Israel in 2013, the most recent year available. The most popular reasons for care are cancer treatments, ophthalmology and pediatric care. The fact that Israel grants any permits is somewhat surprising given the years of hostilities with Hamas, an Islamic group sworn to Israel's destruction. Israel has no direct contact with Hamas and coordinates all movement through the rival Palestinian Authority in the West Bank.
Israel's secret cooperation with Hamas
Alex Fishman
Analysis: For several weeks now, official representatives of the Israeli government and defense establishment have been holding a real dialogue with the Islamic terrorist group in a bid to reach a long-term calm on the Gaza border.
Israel's secret cooperation with Hamas

Israeli government spokesman Mark Regev said granting access to Israeli hospitals was "fundamentally" a humanitarian matter. "This is an ongoing policy. That has been the policy for decades," he said. Israel even treated a daughter of Hamas leader Ismail Haniyeh last year.

Critics of Israeli policy, however, say that Israel's blockade has contributed to the dire state of Gaza's medical system and that Israel bears some responsibility for helping the patients. Although Israel withdrew from Gaza in 2005, it still controls most of its land crossings as well as its airspace and coastline. Egypt has also participated in the blockade, restricting movement through its main border crossing and virtually shutting a once-thriving smuggling business. Israel says the blockade is needed to prevent Hamas, which has fired thousands of rockets into the country, from rearming. But critics note the blockade has prevented medical professionals from moving in and out of Gaza, leaving hospitals poorly staffed and lacking many supplies. Frequent power outages caused by lack of fuel have further hurt the health care system. In any case, the Palestinian Authority pays for the care, providing a source of income for Israeli hospitals. In its report, the World Health Organization noted that hundreds of patients still have trouble getting permits. In 2013, just over 1,500 traveling through Israel's Erez checkpoint, or 11 percent of permit requests, were delayed to the point that they lost their appointments. It also said that 199 patients, or about 1.5 percent, were interrogated by Israel's Shin Bet security service before receiving permits. Palestinians claim these interviews pressure patients into collaborating with Israeli security agents in order to receive care. The children's father, Yasser Hamdan, blamed the blockade for his children's conditions. "The unjust siege caused shortages of medicine and a lack of sufficient medical analyses," he wrote in a fund-raising letter sent to charities. He declined further comment. In a recent report, the advocacy group Physicians for Human Rights Israel said that as long as Israel continues to wield control over Palestinian lives, it is responsible for providing access to health care to ensure that Israeli and Palestinian children receive "equitable medical care." Despite the political difficulties, both the family and their Israeli caregivers talked of the strong connections they have forged during years of treatments. Dr. Daniella Magen, the Israeli physician treating the children at Rambam, warmly greeted them and gave their mother a big hug as she entered their hospital room. "Regardless the Israeli actions against us, we deal with this issue from a humanitarian side; I want my children to live a normal life like any other person," the mother said.