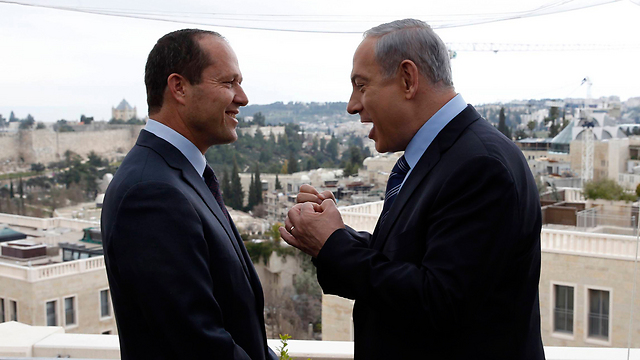 Prime minister gives Ze'ev Elkin the Jerusalem portfolio even though he made a public promise not to appoint minister to the position after disputes between Barkat and previous minister Bennett crippled capital's development.

Netanyahu appointed Immigrant Absorption Minister Ze'ev Elkin as minister of Jerusalem and Diaspora affairs on Monday night as compensation after Elkin had to give up the Strategic Affairs portfolio for Gilad Erdan.

"I regret to learn that cheap political considerations will lead to a waste of public money and unnecessary bureaucracy that will make it harder for the government and municipality to promote and develop Jerusalem," said Barkat, who is a prominent Likud member and considered close to Netanyahu.

Netanyahu made public promise to Barkat not to appoint Jerusalem affairs minister (Photo: Reuters)
In February, during the elections campaign, Netanyahu declared to the media while standing next to Barkat that he would not appoint a minister for Jerusalem affairs and that he would deal with the ministry's responsibilities himself. Netanyahu worked to find a compromise between his promise to Barkat and Elkin's request until the late hours of the night Monday, with Likud officials saying the prime minister only promised not to give the portfolio to one of his coalition partners, specifically to Bayit Yehudi chairman Naftali Bennett who asked to keep it after holding it in the previous government. According to the Likud, Barkat was summoned to a meeting with Netanyahu, who included the mayor in the move and gave the portfolio to Elkin only after the three reached understandings on how Elkin would manage the ministry, particularly with regards to disputed issues, which will be resolved by the prime minister. Barkat, however, presented a different story. "The decision to re-open the Jerusalem Affairs Ministry was made against my opinion and contradicts the prime minister's commitment and the government decision that was approved on Jerusalem Day, according to which the Prime Minister's Office will be in charge of the development and promotion of the city in cooperation with the mayor and municipality," he said. "Jerusalem is not a consolation prize for anyone," he added.

The battle for Jerusalem: Barkat vs. Bennett

Barkat's demand not to appoint a minister for Jerusalem affairs was the result of many disputes the mayor had with the minister in the previous term - Naftali Bennett. They had a hard time working together and many projects were stuck or delayed because of professional and political disputes between the two.

One such dispute was over the appointment of a chairman and director-general to the Jerusalem Development Authority, a body under the Jerusalem Affairs Ministry rather than the municipality, which was supposed to promote multi-annual development projects in the city. Moshe Lion served as the chairman of the Authority until the 2013 elections, and retired when he announced he was running for Jerusalem mayor.

On Monday, before being given the Jerusalem portfolio, Elkin told his close confidants that if he is not given another ministry to replace the Strategic Affairs portfolio he had to give up, he was prepared not to return to the government and remain an MK. While he did not threaten to miss important votes at the Knesset, he said that on certain issues he will "behave like a minister who has been fired."

Gilad Erdan (left), Ze'ev Elkin (Photos: Yaron Brener, Ido Erez)
Erdan, for whom Elkin had to give up the Strategic Affairs portfolio, gave into Netanyahu's conditions on Monday, joining the government without receiving the Interior Ministry he demanded initially. Instead, Erdan will serve as the public security minister as well as strategic affairs minister and minister for public relations (hasbara). He will also receive an addition to the Public Security Ministry's budget worth hundreds of millions of shekels. Among his responsibilities will be representing Israel in the international arena in the fight against the Iranian nuclear program. He will also set up a public relations office, which will "operate against attempts to de-legitimize Israel in the world and the boycott against Israel." These responsibilities were meant to be part of the Foreign Ministry, which was taken apart in Netanyahu's fourth government. Erdan explained his decision on Facebook, "When I thought I was not given the necessary conditions to promote a real change in the police and to our personal security, I preferred to give up the role... now that I've been promised the appropriate tools, I have the ability to act and lead to changes." Elkin was not the only one to suffer a blow from Erdan's appointment. Benny Begin, who was appointed minister without portfolio, will have to resign after only 11 days to make room for Erdan - as Likud has been allocated only 12 ministers in the government.

Energy and Water Minister Yuval Steinitz, meanwhile, had to give up his job as the minister in charge of the fight against the Iranian nuclear program.