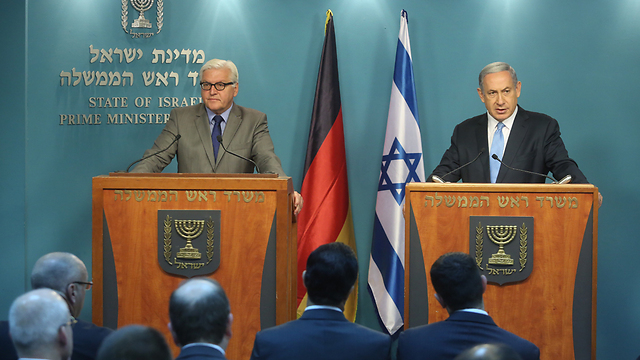 The Gaza Strip must be rehabilitated, German Foreign Minister Frank-Walter Steinmeier said during talks in Jerusalem on Sunday, warning that Israel's fate is tied to that of the Palestinians in the coastal area devastated in a war between Israel and Hamas last year.

"We have to look for options with the Palestinians," Steinmeier said. "The situation in Gaza is very hard; we have to think about the reconstruction of Gaza. Israel's security is tied to the prosperity of Gaza because none of us want another war between Israel and Gaza."

The foreign minister stressed the need for peace and concrete solutions, while Prime Minister Benjamin Netanyahu signalled that Israel is willing to renew long-moribund talks with the Palestinians.

Steinmeier said Sunday that he will visit the Gaza Strip on Monday — a rare trip to the Hamas-ruled territory by a Western leader. No talks with Hamas are planned.

Netanyahu told a joint press conference after his talks with Steinmeier that the arrest of a Lebanese man in Cyprus accused of planning attacks on Israeli targets was an example of Iranian terrorism.

"There is no Hezbollah without Iran," he said.

Addressing the issue of negotiations with the Palestinians, Netanyahu said that direct talks would be the only way forward. The prime minister belittled the recent Palestinian attempt to have Israel expelled from FIFA, the world's soccer association, calling the move an attempt to delegitimize Israel.

Netanyahu with the German foreign minister. (Photo: Mark Israel)
Israel, said Netanyahu, is ready to make concessions and compromise with the Palestinians. The issue, he said, is whether or not the Palestinian Authority would be ready to recognize the State of Israel. Steinmeier stressed the need for peace and concrete solutions. "We have to look for options with the Palestinians," he said. "The situation in Gaza is very hard; we have to think about the reconstruction of Gaza. Israel's security is tied to the prosperity of Gaza because none of us want another war between Israel and Gaza."

President Reuven Rivlin also met with the foreign minister and said that, "We do not need to be pressured, the need to rebuild Gaza and the renewal of direct negotiations is very clear to us. The Palestinian's unilateral actions as we saw for example on Friday in Zurich are unnecessary and a bizarre twist on history - that the successors of those who murdered atheletes in Munich should now be promoting a boycott of Israel, goes against the ideas of humanity and justice."

Deputy Foreign Minister Tzipi Hotovely also met with Steinmeier, and called on Germany to combat anti-Semitism and anti-Israel sentiment on the continent.

"Germany is one of our best friends," she said. "We deeply appreciate its unwavering stance against rising anti-Semitism in Europe, and hope it will continue to lead the struggle against this destructive phenomenon."