The myth of the beautiful Israel

Op-ed: From Orange to Obama, the actions of Israel in the settlements have a fundamental role in the world's perception of the Jewish state, and no amount of rhetoric by Netanyahu and his associates will change that.

"We are in the midst of an intense battle that is being waged against the State of Israel, an international campaign to blacken its name," Prime Minister Benjamin Netanyahu said at the start of the cabinet meeting this past week.

"It has nothing to do with our actions; it is linked to our very existence. What we do counts for nothing – all that matters is what we symbolize. This is a phenomenon we have encountered in the history of our people. What hasn’t been said about the Jewish people? We've been said to poison wells, to drink the blood of small children. And all of these things are being said about us today as well." Addressing the Knesset, the new justice minister, Ayelet Shaked, argued that anti-Semitism was at the root of the boycott campaign. "In the previous century, Jews were dehumanized," she said. "Now, it is the State of Israel that is being dehumanized."

There is a small grain of truth to this claim. The efforts to boycott and isolate Israel are not clean of anti-Semitism, hypocrisy and double-standards. Better men that I can offer precise details of the sins of the world in this regard, and everything they say would be verified and documented.

Photo: AP
The comments made by Orange CEO Stephane Richard at a press conference in Cairo are a fine example. Orange (formerly France Telecom) provides communication services to around 230 million people across the globe. When it comes to Orange in Israel, the global giant provides only its name. Pro-boycott organizations in France are consistently demanding that Orange cut ties with Israel, and these demands are making life difficult for the company's directors. Richard said in Cairo that he would be happy to cut ties with Israeli company Partner, but was concerned that the company would be forced to pay a heavy price as a result of suits filed in the Israeli courts. If a CEO in the United States were to say something similar, he'd be out on his ear within a day. This did not happen with Richard. But back to Netanyahu: "What we do counts for nothing," he said. "The struggle against Israel has nothing to do with our actions; it is all about our very existence."
BDS Movement
The global boycott of Israel is growing silently
Navit Zomer, Itamar Eichner and Udi Etzion
European banks are cutting ties with Israeli counterparts, while supermarkets across the world are appeasing violent protesters who attack their Israeli produce.
The global boycott of Israel is growing silently
The kind of Zionism on which I was raised argued differently. What we do matters a great deal – for good and for bad. It's convenient to think that all of the criticism aimed at Israel from around the world stems from anti-Semitic motives. It's convenient to think that because we are thus released from the need to come to terms with our actions and shortcomings. Before it was split apart, the Intelligence and Strategic Affairs Ministry put together a NIS 150 million budget proposal for combatting the BDS proponents. Wealthy Jews from abroad will be asked to donate a similar sum, if not more. Not one single shekel of the full amount is going to be spent on examining how our actions in Hebron, Jenin and elsewhere in the West Bank influence the BDS movement.

Molad, the Center for the Renewal of Israeli Democracy, published a survey recently about the boycott movement. According to Molad, 90 percent of the boycott demands coming out the West are linked to Israel's activities in the territories. The remaining 10 percent are aimed at undermining the very existence of the State of Israel, under the flag of the BDS movement.

"In all the areas we examined," say Molad sources, "we found that the existing obstacles and the obstacles that are likely to emerge in the future are all directly linked to Israel's rule over the territories and the Palestinian population." 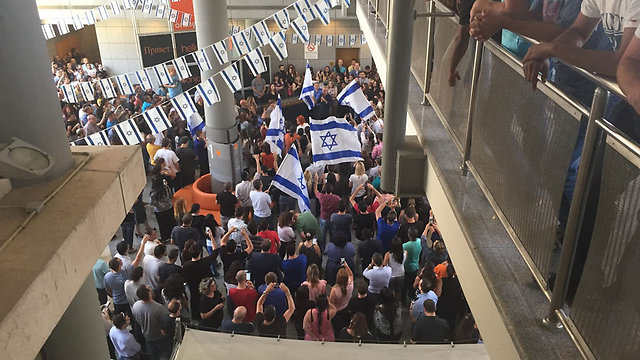 Orange employees in Israel protest comments made by French mobile company's CEO
They go on to outline these obstacles – first and foremost, criticism of the settlement enterprise, which is seen as a serious violation of international law; criticism of Israel's military actions in the territories; criticism of the legal system in the territories; and more. Not a single country in the West questions Israel's right to exist, but there is also no Western country that is willing to accept additional settlement construction. The reality on the ground is more complex. The anti-Israel propaganda on campuses across the United States and in Western Europe doesn't stop at the Green Line. The occupation is the argument, but the enemy is Israel. The students who are being exposed to this rhetoric will be sitting one day in their countries' parliaments, on the boards of international corporations, on court benches. They will be the backbone of the Jewish community. Political parties and human rights organization are gradually adopting similar generalizations. When Israel provides financial compensation to businesses and colleges in the territories that are being affected by the partial boycott, it is helping to promote the general boycott. The propaganda is venomous and false, but our government is only making things easier for it. With the exception of various Evangelical churches, it's impossible to convince people in the West that Israel's West Bank settlements are justified. It matters not how many lecturers we send to address them, or how much money we invest in our campaign. It simply can't be done. Deputy Foreign Minister Tzipi Hotovely can tell them that God promised her all of the Land of Israel, from the Euphrates River in Iraq to the sea; but her God is not their God. Anti-Semitism was rife around the world a decade ago, and two decades ago too. Nevertheless, a boycott of Israel was unthinkable as far as the West was concerned. The Arab boycott was part of the crude oil economy and not a part of the human rights industry. When Israel strengthened economically, the boycott disappeared. Without improving our showing in the field of human rights, the current boycott will not go away. US President Barack Obama gave a fascinating interview to Channel 2's Ilana Dayan. In the interview, aired this past week, Obama posed hope against fear: Netanyahu is offering Israelis fear – fear of Iran, fear of concessions to the Palestinians, fear of change; Obama is offering Israelis hope. I once believed that Fear vs. Hope was the right equation. The results of the recent election have caused me doubts. I'm not convinced that fear is the right word. Perhaps Israelis, or some of them at least, are akin in spirit to fans of a sports team – the Beitar Jerusalem soccer team, let's assume. Fear isn't what drives Beitar fans to run riot whenever their team plays against Bnei Sakhnin. Hatred is what it's all about. With a considerable amount of skill, Netanyahu is successfully uniting a very significant proportion of the Israeli public against a common enemy. Not state against state; but nation against nation, tribe against tribe. The Arabs are a perfect enemy, as are all non-Jews in fact. They're all anti-Semites. With this gloomy picture in mind, Obama asks us to look at pre-1967 Israel. He paints a picture of a utopia of sorts – committed to peace, humanistic values and human rights. It's a myth, of course. In many respects, Israel today is a much better place in which to live than it was in its early years. The main thing we have lost is the belief that things in the future will be more just, more correct and more humane. We are floundering in the puddle we created for ourselves. We are amazed that there are people in the world who compare Israel today to that myth: One was a volunteer on a kibbutz who is now his country's foreign minister; another heard stories about the Jews in the civil rights movement; a third liked what he read in the Bible; a fourth remembers the Holocaust. They all compare the reality to the myth and cannot accept it. They want a beautiful Israel, which doesn't exist. And they want to punish the ugly Israel.