Google boss: Israelis succeed because you don't follow the rules

Eric Schmidt tells Weizmann Institute meet that 'impact Israelis are having on science and technology is immense, that's why I'm here.'

"Israel is booming in terms of entrepreneurship because you have a culture that allows you to challenge authority and question everything. You don't follow the rules," Google executive chairman Eric Schmidt said on Sunday in an address to hundreds of students and researchers at the Weizmann Institute. Schmidt is currently on a short visit to Israel.

Schmidt was accompanied on his visit to the Weizmann Institute by Yossi Matias, vice-president for engineering and chief executive for R&D of Google Israel, as well as executives from the investment fund he heads, Innovation Endeavors, one of the most active funds in Israel in recent years. 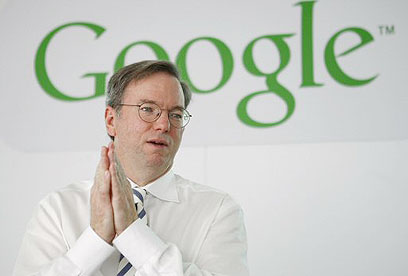 "The impact Israelis are having on science and technology is immense, so that's why I'm here and why I'm investing here," the Google chief said.

In the modern world, Schmidt noted, for an economy to grow, there is a need for innovation and the establishment of new companies.

"For this to happen, a country must invest in several areas – education, high-speed Internet connections, an open immigration policy that allows leading minds to move between countries, and also an environment that encourages entrepreneurship," he said.

Schmidt urged the students and researchers to think big. "You have to make big bets. If you're building something, try to solve problems for the entire world," he said, citing some of the developments Google is currently working on, such as such as contact lenses that can detect blood glucose levels and help people who suffer from diabetes, and autonomous cars without drivers.

Schmidt also addressed the question of how to preserve privacy and security in a world of free-flowing information. "Technically, you can protect your information by using different types of encryption," he said, adding to the amusement of his audience: "Would you like a tip for surfing the Internet securely and privately? Use Chrome."

One of the leaders of the global technology industry, Schmidt, 60, joined Google as its CEO in 2001,at the request of founders Larry Page and Sergey Brin. He served in the position until 2011, turning the once small search engine company into the technology and Internet giant it is today. In 2011, he was replaced by Page and named executive chairman. He is said to be worth some $9 billion.