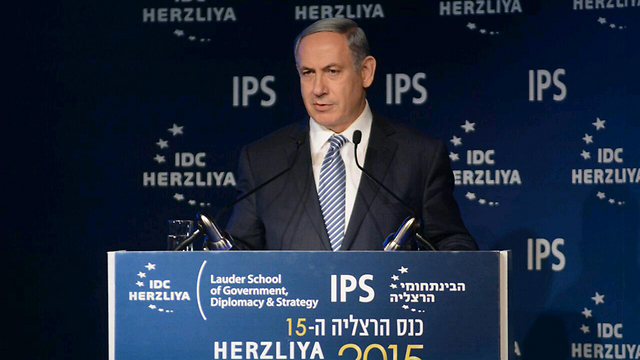 At Herzliya conference, prime minister says nuclear threat is not the only one Tehran poses; it also arms its allies against Israel, produces advance weapons, launches cyber attacks and backs Hezbollah, whose agents are all over the world.

Iran poses Israel in particular and the world at large a five-layered threat, Prime Minister Benjamin Netanyahu said Tuesday evening in his speech at the Herzliya Conference.

The main threat from Tehran is its nuclear program, a threat which will not be alleviated by the nuclear deal currently being negotiated between the Islamic Republic and world powers, Netanyahu said.

The sanctions relief the agreement offers, the prime minister said, would give Iran "no less than $150 billion," money it desperately needs.

Prime Minister Netanyahu at the Herzliya Conference (Photo: George Ginsburg)
"As soon as sanctions are removed, they will get hundreds of billions of dollars, which will bolster Iran's aggression," Netanyahu said. The prime minister also asserted that whether Iran breaks the agreement or not, it will still pose as a threat. "Iran insists on not having real supervision because it is being left with the infrastructure to enrich uranium," enabling it to break the agreement, he said.  On the other hand, if it does not break the agreement, "within 10-12 years it could build an infrastructure of hundreds of centrifuges, with international approval." Those centrifuges, the prime minister said, would be 25 times more effective than Tehran's existing centrifuges. Another threat Iran poses is by arming its allies with advanced weapons, "some of which are aimed at us," Netanyahu said. A third threat is posed by Iran's ally Hezbollah, whose agents operate in over 30 countries around the world. Tehran also poses a cyber threat to Israel, the US and Saudi Arabia.

The fifth threat - Tehran produces advanced weaponry like drones, satellites and submarines. "Their work is impressive," Netanyahu said. "They take a project and finish it in record speed."

Meanwhile, the top US military officer, General Martin Dempsey, reassured Israeli officials that Washington would work to mitigate Iran-related risks, with or without a deal.

Dempsey said that while Iran would likely spend some newfound resources gained from sanctions relief on its military and its surrogates, the long-term prospects were "far better" with an Iran that wasn't a nuclear power.

Turning to the Israeli-Palestinian conflict, Netanyahu said that Palestinian President Mahmoud Abbas was not willing to talk.

"The Palestinians have a trick in which they refuse to talk every time, and then turn to ask for a boycott against Israel and submit demands to the UN Security Council and say we are refusing to renew talks," he said.

"I've been going to talk to Abbas for six and a half years and I had to do things that were difficult for me - settlement freeze for almost a year, and on the tenth month he agreed to meet. We met for three hours in Sharm el-Sheikh and three hours in Jerusalem, and he had one demand - continue settlement freeze," the prime minister went on to say. "I called on him to renew negotiations without preconditions."

"He can make international moves without talking and then accuse Israel of being unwilling to talk," Netanyahu added.

He said Palestinian efforts to force a peace deal on Israel through proposals by world powers would be counter-productive.

"The idea of imposing peace from the outside doesn't work," Netanyahu stressed.

He also stressed the need to ensure Israel's security in any future agreement.

"The problem in Gaza is not arms smuggling, because there is not a lot of that - there's self-production. They are producing pipes with accurate aiming capabilities and this is because we are not there," he said. "This doesn't happen in Ramallah because when you need a security regime, it's Israel's security abilities."

"We must ensure a long-lasting and stable security regime," Netanyahu stressed. "This is not an excuse, there are real things and that is why we need to negotiate the recognition of two national states with real security arrangements."