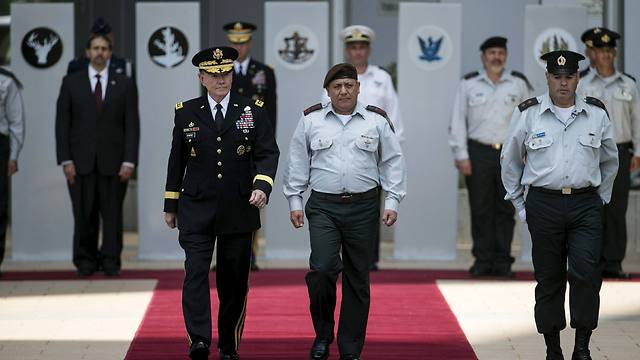 US military chief: Iran will increase funds to proxies after nuclear deal

The General said he understands why Israelis believe a nuclear deal will give Iran room to accelerate its funding of surrogate Shiite groups like Hezbollah and to put more resources into its own military.

"I share their concern," he said. "If the deal is reached and results in sanctions relief, which results in more economic power and more purchasing power for the Iranian regime, it's my expectation that it's not all going to flow into the economy to improve the lot of the average Iranian citizen." Dempsey said

However, the military chief also sought to sooth concerns, saying that the US will ensure that Israel maintains a military edge over potential adversaries, including Gulf Arab states, regardless of whether Washington completes a nuclear deal with Iran.

Dempsey told reporters in an interview Tuesday that it's too early to know whether Israel's security will be enhanced by a US nuclear deal with Iran.

General Dempsey met Tuesday with his counterpart IDF Chief of Staff Gadi Eizenkot and Minister of Defense Moshe Ya'alon. Dempsey later told reporters that: "Israel just wants to make sure that we're not just helping them on the qualitative side."

Israeli leaders want to be assured that as the US helps expand and develop Gulf States' militaries, "that they don't grow so much just simply in size that they become an overwhelming presence in the region," he said.

Dempsey's comments where shadowed by a report in the New York Times which stated that Israeli military officials where pressuring the visiting general to act for an expansion in the American military aid package to Israel, in order to grant Israel a 'qualitative military edge' over the newly upgraded Gulf militaries.

One of the major concerns in Israel is that regional states will seek nuclear weapons in order to have a deterrent in case Iran continues the race to a nuclear weapon in the wake of a deal.

Tuesday saw the Saudi Ambassador to the UK state that "all the options are on the table," including the possibility that the kingdom will take possession of nuclear weapons from Pakistan. These weapons are readily accessible to the Saudis due to their cooperation and support for Pakistan's military program.

In response Dempsey said Israeli officials raised with him their concern about the scope of US arms sales to Gulf Arab states as they build defenses against an expansionist Iran.

The US has long promised to ensure that Israel enjoys a qualitative military edge in the region.

Dempsey, who will meet with Netanyahu on Wednesday, is on his fifth and final visit to Israel as Joint Chiefs chairman, from which he is meant to retire in October.

Dempsey's visit to Jerusalem is the first by a senior American military officer since Netanyahu told a joint meeting of Congress in March that Obama's overture to Tehran would "all but guarantee" that Iran will obtain nuclear weapons.

In an explicit challenge to Obama, Netanyahu predicted that a nuclear-armed Iran would turn the Middle East into a "nuclear tinderbox."

Dempsey said the US intends to continue helping Israel improve its air and missile defenses and will be talking to the Israelis about ways to improve their cyber defenses, their maritime security and their means of countering the military use of tunnels such as those from Gaza.

The Chairman also said he thinks a nuclear deal, taken as a whole, could be beneficial in the region.