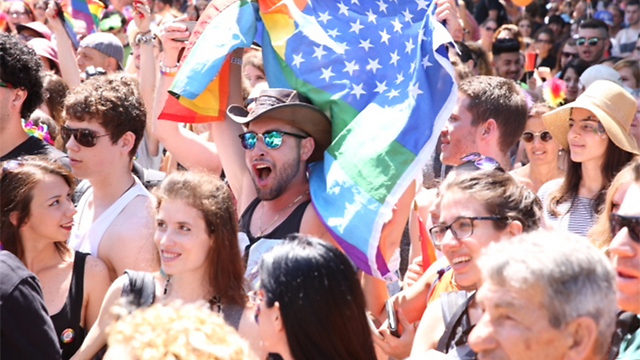 Parade starts at Gan Meir, focuses this year on promoting equal rights to members of the transgender community.

The 17th Pride Parade held in Tel Aviv on Friday drew record-breaking crowds of somewhere between 120,000 to 160,000 according to the Tel Aviv municipality, somewhat lower than the previously expected 200,000 marchers. Tourist participants were expected to number 30,000.

The Pride Parade began in Tel Aviv's Gan Meir with a fair, continue onto the streets of Tel Aviv and ended with a concert by drag queen Conchita Wurst, the Austrian singer who won the 2014 Eurovision.

This year's parade focuses on promoting equal rights to members of the transgender community and accompanied with the slogan: Tel Aviv loves all genders.

Tel Aviv Mayor launched the parade at Gan Meir, saying, "My proud friends, I am happy to stand on this stage and launched the 17th Pride Parade. We've gone through a lot and reached a different reality in Tel Aviv and in Israel. To the politicians I'd like to say there is a lot more legislation left to do in order to promote the LGBT community in Israel."

Gan Meir was filled with booths providing information on LGBT organizations, and a painting exhibition focusing on the transgender community was held.

The parade itself, which started at midday, went through Tchernichovsky Street to Bugrashov Street and onto Herbert Samuel Street. At 1 pm, nine trucks loaded with DJs and dancers joined the parade at the corner of Frishman and Herbert Samuel.

At around 2 am, the parade reached Charles Clore Park where, on a giant stage, well-known artists in the LGBT community performed, with Wurst headlining.

Marchers walk with signs saying: 'My child, only your way' and 'boy or girl, who cares' (Photo: Ido Erez)