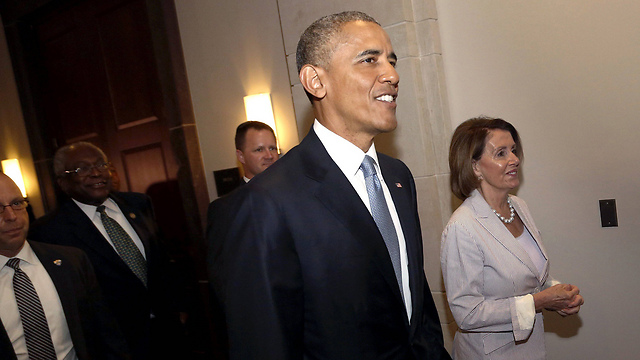 US trade bills seek to halt boycotts of Israel

Amendments to Obama's sweeping trade package would fight BDS, but Democrats opposed to other sections are holding things up.

The United States House of Representatives on Friday approved a measure to allow a "fast track" process for a free trade agreement between the US and Europe, which includes a section obligating EU countries to refrain from any kind of boycotts on Israeli goods.

The amendment to the bill also states that boycotts, divestment, and sanctions against Israel by governments, governmental bodies, and international organizations are contrary to the principle of non-discrimination enshrined in the General Agreement on Tariffs and Trade (GATT), which regulates trade agreements and lowering of tariffs.

President Obama arriving to urge Congress members such as Nancy Pelosi (R) to back the agreement (Photo: Reuters)

The bill further supports an American probe into companies pushing for or surrendering to the boycott and instructs the president to report to Congress on boycott activities after 180 days since the bill's implementation, as well as describe what steps the US government is taking to encourage foreign countries and international organization to stop boycotting.

Additionally, the president will need to explain what steps the government is taking to prevent probes and filing of lawsuits by governments or international bodies against Israel.

Republican Representative Peter Roskam was the first to push the anti-boycott measures, which have been endorsed by former Israeli ambassador MK Michael Oren of Kulanu.

However, the bill cannot be signed by President Barack Obama yet. Democrats overwhelmingly voted against the Trade Adjustment Assistance (TAA) bill, a worker's aid program – thus also torpedoing the president's path to the larger trade package.

Despite the failure of the Trade Adjustment Assistance bill, Congress went on to narrowly approve the president's request to pass Trade Promotion Authority (TPA), which would clear the way for signing the Trans-Pacific Partnership (TPP) – a major deal with around a dozen nations, whose unreleased details have been partially leaked.

The TAA and TPA bills are conditioned on each other, meaning both must be passed. The political divisions over the TPP caused Democrats to kill the TAA, rendering the TPA toothless. Congress must now work towards an agreement before the president can sign the package into law.

Currently there are no European countries boycotting Israel, with the exception labeling of goods made in settlements, and Europe is concerned that a boycott of Israel could damage their free trade agreement with the US.

For the same reason, the French government responded decisively – if somewhat belatedly – to the statements by Orange CEO Stephane Richard, who announced a plan to cut ties with Israel before apologizing and making a trip to Israel to visit Prime Minister Benjamin Netanyahu.

President Obama is pushing for free trade agreements with Europe and East Asia, and the fast track he seeks requires the approval of a two-thirds majority in Congress. Republicans are with Obama on this issue, and it is his own party who is raising opposition out of a concern for unions.

In order to obtain the go-ahead from Congress for the fast track plan, the president received advance instructions from Congress, including the amendments dealing with the economic boycott against Israel and fighting boycotts.

Obama arrived at Capitol Hill to convince his party's members to stand behind the bill. While his pleas were not heeded this time, an agreement could be reached next week.