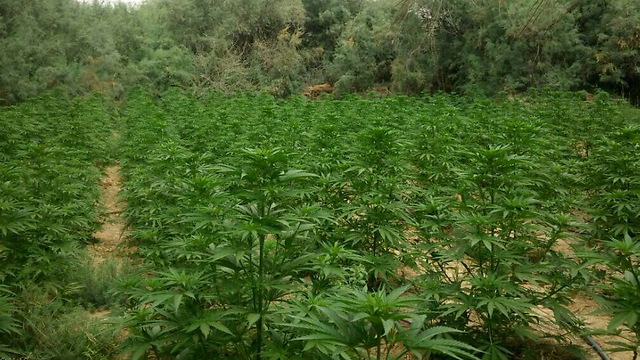 Why is Israel cracking down on medical marijuana?

This trend, which contradicts growing global trends and public debate in Israel, has led many to question whether the Health Ministry is colluding with pharmaceutical companies.

For Eitan, 25, medical cannabis is nothing short of a miracle. He's been using it for quite some time now to combat the nausea, vomiting, excruciating pain and weight loss caused by the pancreatic cancer he suffers from. "Without the cannabis, I honestly cannot function," he says.

But very soon, so it appears, his nightmare could come back to haunt him. "My permit is set to expire in a few weeks, and the hospital isn't going to re-approve it because they've been instructed to cancel permits," Eitan says. "Without medical cannabis, my life will become hell. I'm already dealing with a serious illness, so why make turn my life into a nightmare?"

On taking up his position as director of Ichilov Hospital at Sourasky Medical Center in Tel Aviv last week, former Health Ministry director general Prof. Ronni Gamzu sent out a memo concerning the dispensing of medical cannabis at the institution.

In an email to doctors and nurses, he noted that prescriptions for medical cannabis would be given only to patients with terminal cancer, and only following consultations with pain specialists, oncologists and the approval of the director of the hospital's Oncology Ward.

Gamzu's memo also instructs doctors to consider revoking the permits of patients who come to the hospital's pain clinic already in possession of a prescription for cannabis.

The clinic at Ichilov thus joins a list of other pain clinics around the country that are making it very difficult for patients to begin treatment with medical cannabis or renew their existing permits. This trend, which goes against the grain in relation to the growing trend elsewhere in the world and the public debate in Israel, is a continuation of the policies promoted by the Health Ministry during the last government. Contrary to the testimonies of the patients, the hospitals prefer to dispense other drugs to combat the severe side effects or chronic medical problems from which thousands of patients are currently suffering.

When the demand rises

According to health system officials, around one million Israelis smoke cannabis; and because cannabis is illegal, they claim, many people are going to the pain clinics "with the purpose of trying to receive permits and make their smoking legal."

Over the past four years, says one health system official, the number of Israelis requesting medical cannabis has increased markedly, with the country now a world leader in terms of the number of requests for prescriptions.

"You have to understand that we have no problem with the use of medical cannabis," says a senior doctor. "We have a problem with people who come to the pain clinics to try to get a permit and thereby create a massive workload at the clinics, which then end up handling only requests for permits. It's unbelievable.

"If they were to establish clinics dedicated solely to cannabis treatment, the situation would improve dramatically. All the claims about ties between doctors or the Health Ministry and the pharmaceutical companies are baseless – if not insane – figments of the imagination."

The speculation about ties between the pharmaceutical companies and doctors or the Health Ministry hasn't appeared out of nowhere. Following numerous studies on the efficacy of cannabis, and in the wake of highly successful legalization moves in places such as Colorado in the United States, one sometimes hears or reads of claims that the war on medical cannabis is motivated primarily by the fact that drug companies would lose a fortune if their medications were replaced by marijuana, which is cheaper and more readily available.

Health system officials repeatedly reject such claims; but patients who are suffering due to the current situation can't understand why the authorities are making life even more difficult for them.

"My son suffers from Crohn's disease," says Orit, the mother of Daniel, 16, from Ramat Hasharon. "We tried every possible medical treatment – steroids, morphine and everything else the doctors suggested – and nothing helped him. Side effects began appearing as a result of the treatments and medications. Daniel swelled up and gained weight; hair started growing on his body; involuntary hair loss and excruciating pain.

"Some time ago, we encountered a child who was being treated with medical cannabis in the hospital bed next to us. We started to look into the matter and decided to try using cannabis. It did wonders for Daniel. All of a sudden, he was up on his feet and functioning, and even managed to go to school. The side effects disappeared almost entirely."

But when Daniel tried to obtain an official permit through one of the pain clinics, he was forced to wait for more than six months. "Even now, after receiving the permit we were hoping for, they're allowing us to use only the oil, which doesn’t have an effect on him," Orit says. "He needs the cannabis flowers, but we have to wait now for someone to respond to us; and in the meantime, he is going through terrible pain."

Elad, 55, was involved some 12 years ago in a serious road accident, after which he endured a lengthy rehabilitation process. Ever since, he has suffered from severe pain all over his body and has used a variety of painkillers.

"I got to the stage at which my quality of life was truly affected," he says. "I heard about medical cannabis and approached a pain clinic at the hospital, but I was told that cannabis is given only to patients with terminal cancer. I don't understand why. People with permits have told me how it's changed their lives. So what's stopping them from giving it to me? I'm sure it's a matter of politics and interests."

Yifat, 34, also suffers from severe pain as a result of a work accident some five years ago, and she, too, was denied a permit for cannabis. When she asked why, she was told that efforts are being made to reduce the number of patients who are being treated with medical cannabis in Israel.

"The fact that there are thousands of people who are submitting requests and that someone believes they are trying to receive permits fraudulently is not my concern," she says furiously. "I'm suffering; and if medical marijuana can help me, then I want to receive a permit to use it."

Israel's patient-care organizations have also noticed a clear change in policy with respect to the use of medical cannabis in recent months.

"There's a clear-cut trend at the hospitals to retreat from the use of medical cannabis," says Gil Luxenbourg, CEO of the Israel Medical Cannabis Association. "It's absurd that people cannot receive treatment at Ichilov despite the fact that they are in terrible pain."

According to available data, around 23,000 Israelis are being treated with medical cannabis under official permits. Most receive a permit for cannabis as a treatment to combat chronic pain caused by cancer, neurological illnesses, Tourette syndrome, multiple sclerosis and the like.

Since cannabis in Israel is still classified as a dangerous substance and banned under the Dangerous Drugs Ordinance, only around 30 doctors have been authorized by the Health Ministry to issue permits for its use. The problem: To receive the permit, to extend it or to amend the dosage, one has to go through one of the pain clinics – and they are shutting their doors to patients seeking treatment with medical cannabis.

"What we have here is a hidden agenda and silent conspiracy designed to make things difficult for the patients," Luxenbourg says, pointing a finger at the Health Ministry.

"Unquestionably," Luxenbourg continues, "patients receiving cannabis treatment are being persecuted. When the medical adviser of the Medical Cannabis Unit uses terms such as 'hits' instead of 'puffs' and 'baked' instead of "effects and side effects,' it's no wonder that pain clinics are closing their doors or forcing people to wait very long to receive a permit."

In an effort to come to the assistance of the patients, Meretz MK Tamar Zandberg took up the matter recently with Deputy Health Minister Yaakov Litzman, asking him to intervene on their behalf.

Zandberg, a staunch proponent of medical cannabis, and legalization of cannabis in general, said in a letter to the deputy minister that the argument regarding the high number of patients requiring treatment was unacceptable because the criterion for receiving treatment should be the illness itself and not the number of patients suffering from it.

"There are many patients who are suffering from serious medical problems; and over and above having to deal with their terrible pain, they are now being forced to deal with a Kafkaesque bureaucratic entanglement. It's very frustrating and places the patients in a very difficult position," Zandberg wrote.