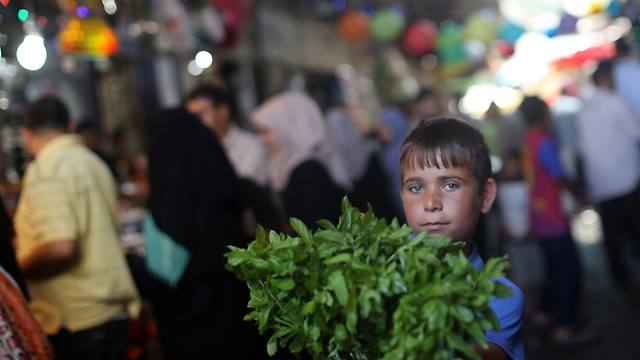 Gazans look to a hopeful future through resilient character

A year after Operation Protective Edge, there is a stark contrast in Gaza's scenery, where destroyed neighborhoods can be seen from the roof of a new boutique hotel.

As the sun sets over Gaza, there isn't a table to be found on the terrace of the Roots hotel, with views overlooking the port and the gently crashing waves of the Mediterranean.

Crowds have gathered for Iftar - the nightly breaking of the Ramadan fast - and the atmosphere is excited; young men and women taking photos on their iPhones, puffing apple-scented nargila pipes and watching a dance troupe as they dine on hummus, pita, chicken and sweet pistachio cakes.

It is a far cry from the death and destruction that consumed Gaza a year ago, when Israel launched an air and ground assault to put an end to constant rocket fire by Hamas militants from Gaza. The July-August conflict left more than 2,100 Palestinians, and 73 Israelis dead.

The scene on the hotel terrace is not a sign of how far Gaza has come since - quite the contrary, as not a single one of the estimated 100,000 homes damaged or destroyed in the war has yet been rebuilt - but of the stern resilience of many Gazans.

It reflects too the striking contrasts the territory throws up - outside Roots, a stylish hotel that wouldn't look out of place in Europe, there are smart cars parked two or three deep. A few kilometers away in the district of Shejaiya, there are whole neighborhoods lying in ruins, families sleeping rough in makeshift shelters amidst the smashed rubble of the war.

If the former is an image of what Gaza might aspire to be, the latter is closer to what many parts have become.

Since the end of the war, the flow of reconstruction materials into the territory has been greatly restricted, with Israel insisting on tight monitoring of all imports of cement, iron and other materials that could be employed by Hamas to rebuild secret tunnels that were used to attack Israel.

So slow has the influx of goods been that the United Nations last week said it could take 30 years to rebuild the damage.

Last month, the International Monetary Fund described Gaza's economy as being on the verge of collapse, with unemployment nearing 45 percent, GDP down 15 percent in 2014 and the once-strong manufacturing sector dying.

Of the 1.8 million people that live in Gaza - a population growing by 50,000 a year - nearly two-thirds are dependent on aid in some form or another. It is the United Nation's longest-running relief operation, set up in 1949.

The head of those operations, Robert Turner, will leave his post next month after three years in Gaza. Since the war, he has been witheringly critical of the obstacles to reconstruction. But ahead of his departure, he tried to sound a positive note.

"I refuse to yield to pessimism," he said. "Gaza is a place where the human spirit has shown its indomitability time and time again."

To many Gazans, that is part of the problem. So adept have they become at getting by - finding a way to deal with up to 16 hours of power cuts a day, smuggling in everything from live animals to cars via tunnels, scraping together an existence amid militant rule and war - that people begin to regard the extraordinary as normal.

"Outsiders think 'Well, if they're managing to get by, maybe it's not so bad'," said one life-long Gaza resident.

Sitting on the terrace of Roots, where young men and women, many not wearing Islamic headdress, were comfortably chatting and smoking together, it is easy to forget that Gaza has been run by the Islamist movement Hamas since 2007.

At night, after Iftar, masked Hamas militants, many of them bearing arms, walked through the streets of Gaza in a military-style parade, urging young men to sign up to the movement.

Rather than clamping down on the freedom on show at Roots and other beachfront hotels, Hamas's priority is to retain power and deliver something to those battling to make ends meet.

In recent weeks it appears to have made some progress. After more than a year of keeping its border with Gaza mostly closed, Egypt has in recent days opened the crossing at Rafah to allow people and goods to move in both directions.

There is talk of Hamas offering Israel a long-term truce, which would free up the flow of goods and people across their shared border. In recent weeks, up to 2,000 Gazans a day have been crossing, a marked increase from a trickle months ago.

Qatar, a major financial supporter of Hamas, has nearly completed the construction of a new road along the beachfront and has other projects in the pipeline. Yet there are threats.

Militant Salafist groups claiming ties to ISIS have started to agitate in Gaza, firing occasional rockets into Israel and carrying out attacks. They have threatened to overthrow Hamas and the rival Fatah party. As well as a threat to Palestinian authority, they are of deep concern to Egypt and Israel.

While Hamas may turn a blind eye to the small liberties taking place at Roots and elsewhere during Ramadan, ISIS and its sympathizers are unlikely to be anywhere near as accommodating.