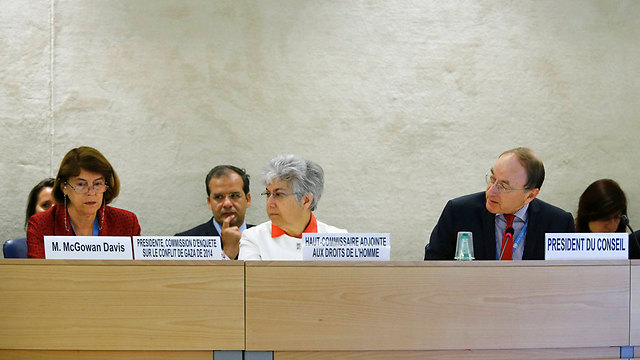 The UN Human Rights Council on Friday voted to adopt a report made by a UN inquiry commission on Operation Protective Edge in Gaza last summer, calling on Israel and the Palestinians to prosecute alleged war crimes and to cooperate with the International Criminal Court's preliminary investigation.

Forty-one countries voted in favor of adopting the report, five abstained - India, Kenya, Ethiopia, Paraguay, Macedonia - and only one, the United States, voted against, saying it was biased against Israel.

European countries said they were disappointed it didn't explicitly mention rockets fired by Hamas toward civilian areas in Israel, but after hours of behind-the-scenes negotiations on the text, all European Union member states of the Council, including Britain, France and Germany, voted in favor.

Israel's Ambassador to Geneva, Eviatar Manor, slammed the decision to adopt the report, saying, "Hans Christian Andersen wrote famously that the King is naked. So let me assume the role of the little boy in the story and tell you - this Council has lost its bearing."

Calling the adopted resolution "an anti-Israeli manifesto," Manor asserted that it "distorts the intention of the authors of the report by completely ignoring alleged violations of International Human Rights Law and International Humanitarian Law committed by Hamas and other Palestinian armed groups."

"Hamas continues to fire rockets and terror acts against Israelis go on as I speak," he added.

"Three - Israel is fully committed to investigating all alleged violations of the Laws of Armed Conflict. Israel's investigative mechanism has already filtered close to 200 cases. Over 100 of these cases have been handed over to the Military Advocate General.

"Four - however, Justice must be done, first and foremost. The Chair of the Commission of Inquiry has stated in her press conference that Israel has a robust system for investigating alleged violations. It must be allowed to complete its course.

"Five - Israel is carefully studying all reports on Operation Protective Edge, whatever their source, flaws or bias."

The commission determined that one third of Gaza dead during Protective Edge were children and urged both sides to cooperate with International Criminal Court investigations. Prime Minister Benjamin Netanyahu called the report biased.

Manor, in his address to the UNHRC on Friday, said that "we are not dealing here with fairness or moral integrity. We are dealing with a UN organ that is highly politicized, obsessive with Israel, ignoring serious situations of human rights violations across the globe and spending its scarce resources of money and manpower on reports on my country."

He accused the council of being "agent provocateur feeding the flames," saying it "failed to be a constructive player and promote rapprochement between Israelis and Palestinians."

Israel's Foreign Ministry also criticized the decision to adopt the resolution, saying that "The Human Rights Council once again proved it is irrelevant and disconnected from reality. While the world around us burns in flames - a serious terrorist attack in Egypt, the continuation of anarchy in Syria, millions of refugees fleeing their homes - the council continues focusing on Israel."

"The resolution that was adopted today is a result of a Palestinian move meant to isolate Israel and tie its hands in the just fight against the terrorism of militant Islam. This council has so far adopted more unilateral resolutions against Israel than the sum total of resolutions adopted there against the rest of the world," the ministry went on to say.

The Foreign Ministry stressed that Israel, as "a law-abiding state with a legal system much respected in the world, is the only one that can investigate itself, as it does after every military campaign."

The ministry decried the fact the Palestinian Authority has not condemned nor has it convened a special meeting of the UNHRC in light of the recent terror attacks against Israelis.

Prime Minister Netanyahu slammed the decision, saying the Human Rights Council "does not care about the fact and does not really care about human rights."

"The today in which there is fire from Sinai at Israel, and while in Egypt the Islamic State is committing brutal terror attacks, in Syria Assad is slaughtering his people and in Iran the number of arbitrary executions rises every year - the UN's Human Rights Council decides to condemn the State of Israel, while it is innocent of any crime, the State of Israel that acted to defend itself from a murderous terror organization."

Opposition MK Tzipi Livni (Zionist Union) also slammed the resolution, saying "at its foundation is a comparison between the IDF and Hamas, one-sidedness, and disregard to Hamas' crimes. Even in its 'softened' version it is unacceptable, as it gives the Palestinians more tools to prevent Israel from defending itself and is another step towards the International Criminal Court at The Hague."

Opposition MK Avigdor Lieberman (Yisrael Beytenu) said that while a rocket was fired at southern Israel, the UNHRC decided to adopt the UN report. "It's only another proof that this council is a mask behind which hide terror organizations and anti-Israeli organizations whose goal is to harm Israel," he said, calling on Netanyahu to cut ties with the Human Rights Council.

The list of countries and their votes on the resolution (Photo: Hilel Noyer)

The Prime Minister's Office said Netanyahu had spoken to his counterparts in India, Kenya and Ethiopia over the past few days about the resolution, calls which eventually led these decisions to abstain from the vote.

India's decision to abstain from the vote is an unprecedented achievement for Israel. In the past, New Delhi has always voted against Israel. But since the election of Indian Prime Minister Narendra Modi and the warming of ties between the two countries, India has changed its voting pattern for the first time.

The PMO also expressed its appreciation to the US, the only country to oppose "the hypocritical condemnation" from the UN Human Rights Council.

However, Israel was disappointed with the fact many important Western states voted to adopt the decision, including France, Germany and Britain.

In order to ensure the passing of the resolution, the Palestinians had to soften the resolution, removing any call to action from the UNHRC, leaving it a merely symbolic decision.

Karim Lahidji, President of the Paris-based International Federation for Human Rights, said in a statement: "By supporting this milestone resolution, the EU sends a message that ... impunity will not prevail."

Reuters and Yoav Zitun contributed to this report.