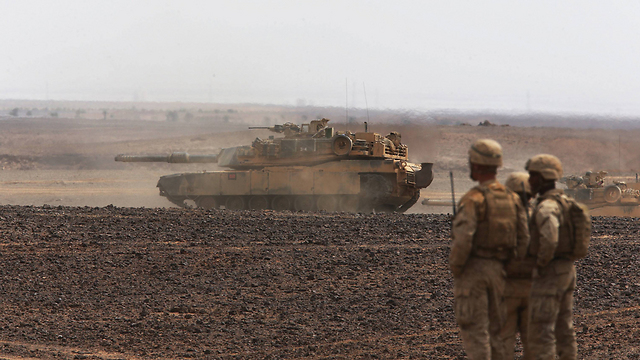 Security forces said to apprehend individual possessing 45 kg of explosives in 'most serious case in a decade'.

The Jordanian newspaper Al Rai reported Monday morning that Jordanian security forces had foiled a terror plot by a member of an Iranian-backed group.

According to the report, the suspect belongs to the Iranian Bayt al-Maqdis group – which is unrelated to the identically named Egyptian group that has recently changed its moniker and sworn allegiance to Islamic State.

The suspect reportedly holds Iraqi and Norwegian citizenship, was arrested in northern Jordan, and found to be in possession of large amounts of explosives.

Al Jazeera reported the suspect intended to use the explosives for terror attacks inside Jordan, as well as smuggle them into the West Bank. According to the network, the suspect also examined the Israel-Jordan border, planning to commit attacks in that area.

The Qatar-based news network reported that the suspect was also accused of working for Iranian intelligence and of taking part in several assassinations in the past.

A Jordanian source familiar with the investigation told Al Rai that 45 kilograms (about 99 pounds) of explosives were found in the suspect's possession.

The Jordanian source told the newspaper that a major terror operation had been averted. "This is the most serious case in a decade in terms of the quantity of explosives discovered and their quality," said the source.