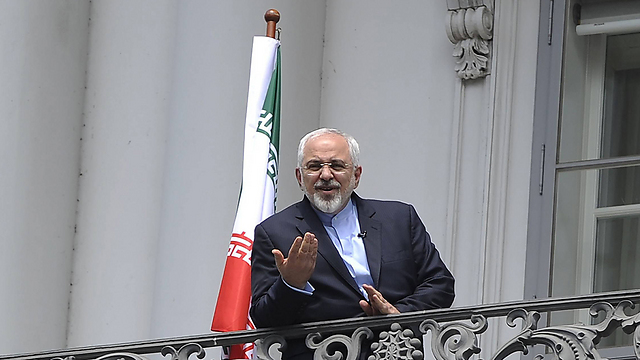 With an emergent Iran deal all but certain, officials in Israel are eyeing their next battle on the floor of the Washington legislature.

Diplomatic sources in Israel said Sunday that the forthcoming deal between world powers and Iran is much worse than the initial framework agreement signed fourth months ago in Lausanne, and claim that since then there have been even more concessions. Under the assumption that a deal will be signed, Jerusalem is preparing for its next battle: preventing congressional approval for the deal.

Secretary of State John Kerry held a press conference in Vienna Saturday, in which he stated that he agrees with Iranian Foreign Minister Zarif's sentiment that a deal has "never been closer". Kerry said that "the right choices" could lead to a deal being signed this week.

Mohammed Zarif (Photo: AP)
Kerry went on to mention, however, that gaps still remained with Iran on major issues. Officials in Israel were unfazed by reports of disagreements in the Vienna talks, suggesting the aleged issues where purposely leaked in preparation

signing a final accord.

John Kerry at the talks (Photo:AP)
Israeli officials were still pushing for last-minute amendments to the deal, even if chances of implementing them remained slim. Energy and Infrastructure Minister Yuval Steinitz had spoken with representatives of Germany, France, and the UK in recent days, calling their attention to weak points in the deal.

In anticipation of a final deal, officials in Jerusalem are preparing to exert pressure on the US Congress to prevent it from signing off. If a deal is submitted to Congress before July 9, the vote would be held within 30 days due to the upcoming congressional recess.

On the other hand, if the deal were to be submitted after July 9, the vote would only take place after 60 days. If a majority votes against the Iran deal in Congress, President Obama can veto the move. If the president does use his veto, however, it would allow him to decide when to return the motion for a revote in Congress -- in which case a two-thirds majority in both houses would be needed to bypass the presidential veto.

Israel is pressuring Congress members to scuttle the deal in the first vote. If the deal goes to the floor, Israel will make a concerted diplomatic effort to achieve a two-thirds majority in order to bypass a possible veto. Officials in Jerusalem estimate that Obama will have enough support to approve the measure in the first vote, thanks to fear among members of Congress that denying the measure while other powers begin trading with Iran will come at a great economic cost to US industry. There are, however, officials in Israel who believe the battle is not over yet, and that with the right work a majority can be achieved against the measure in the first vote.

Prime Minister Benjamin Netanyahu himself is already preparing to battle for the hearts and minds of Congress members, and opened this week's government meeting with fierce criticism of the possible deal.

"The deal being formed in Vienna is not a breakthrough, it’s a breakdown," Netanyahu said. He warned that it "would pave the way for Iran to produce multiple nuclear weapons, and will bring it hundreds of billions of dollars, which Iran will use to further aggression and terrorist exploits, both in the region and around the world.

"It’s a bad deal. It's not any better, and is even worse, than the deal made with North Korea, which led to a nuclear arsenal in North Korea. But here we are talking about both an unconventional and large conventional threat to Israel, the region's states, and the world as a whole."

Meanwhile, diplomatic officials within Israel have leveled heavy criticsm against Netanyahu, protesting the fact that he has not resumed talks with the US government on the size of Israel's security aid package in the wake of a deal with Iran.

The same officials said that unlike Israel, Saudi Arabia and the Gulf nations understood that a deal with Iran is a pre-determined fact and are already deep in negotiations with the Americans on the size of the conciliatory defense aid package they will receive.

These officials said that Israel should have entered into defense aid package talks with Washington before the deal, because then Obama would have been more generous than an agreement is signed, especially if Israel is going to campaign against the deal in Congress.