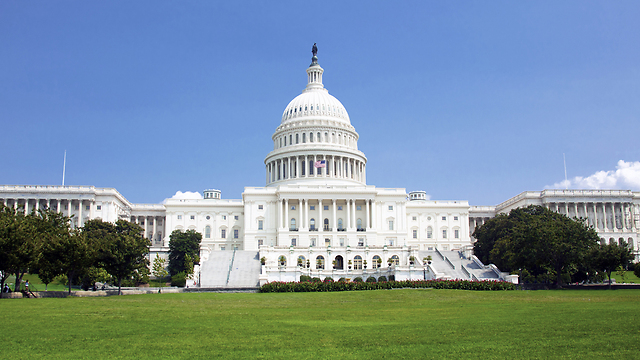 Iran deal faces fight in US Congress but will likely survive

Congress has 60 days to review deal; chances of a 'resolution of disapproval' that would cripple the deal are slim; Obama vows to veto any bill Congress passes to block deal.

The nuclear deal between world powers and Iran starts a new phase of intense negotiation - this time between the Obama administration and the US Congress, where some Republicans have long been working to sink an agreement.

Any effort in Congress to overturn the deal will face an uphill fight. Republicans have majorities in both the House of Representatives and Senate, but they would need the support of dozens of President Barack Obama's fellow Democrats to sustain a "resolution of disapproval" that could cripple a deal. The chances of that happening are slim. A resolution of disapproval would need only the Republican majority to pass the House, but would require the votes of at least six Democrats to get the 60 to advance in the Senate. The chances of mustering enough votes to then overrule an Obama veto are slimmer still.

United States Capitol (Photo: Shutterstock)
Obama vowed on Tuesday that he would veto any bill Congress passed that would prevent implementation of the Iran agreement. Nancy Pelosi, who leads the Democrats in the House and spoke to Obama last night, praised him in a statement. "I commend the president for his strength throughout the historic negotiations that have led to this point," she said, promising Congress would "closely review" details of the agreement.

US Democratic presidential candidate Hillary Clinton on Tuesday called the new deal with Iran an "important moment" and said that based on what she knows now it is a step toward curbing Iran's nuclear ambitions.

"This does put a lid on the nuclear program but we still have a lot of concern about the bad behavior and the actions by Iran, which remains the largest state-sponsor of terrorism, which does go after and undermine governments in the regions, that poses an existential threat to Israel, that unfairly, unlawfully confines and tries Americans on trumped up charges. That bad behavior is something we have to address," she told reporters.

Senate Democrats have stood firm to date against Republican-led efforts to interfere with the talks, which included Iran and the United States, Britain, China, France, Germany and Russia.

In the House, more than 150 Democrats, including Pelosi, signed a letter in May strongly supporting the nuclear negotiations.

Harry Reid, the US Senate Democratic leader, said on Tuesday the Iran nuclear agreement is the result of years of hard work by President Barack Obama and his administration in a brief statement that did not support or criticize the deal.

"Now it is incumbent on Congress to review this agreement with the thoughtful, level-headed process an agreement of this magnitude deserves," Reid said.

"I was skeptical at the beginning of this process, and I remain skeptical of the Iranians," said Rep. Steve Israel, the highest ranking Jewish Democrat in the House. "In the fall, there will be a vote on this deal, and my obligation is to review every word, sentence and paragraph of the deal to ensure it satisfies my continued concerns."

Leading Republicans harshly criticized the deal. John Boehner, the speaker of the House, said Obama had abandoned his own goals for the negotiations and promised to fight a bad deal.

"Instead of stopping the spread of nuclear weapons in the Middle East, this deal is likely to fuel a nuclear arms race around the world," he said in a statement.

"If it's as bad a deal as I think it is, we're going to do everything we can to stop it," Boehner said.

US Republican presidential candidate Marco Rubio said he expected Congress to vote against the Iran nuclear deal, saying the agreement undermines US security.

"I have said from the beginning of this process that I would not support a deal with Iran that allows the mullahs to retain the ability to develop nuclear weapons, threaten Israel, and continue their regional expansionism and support for terrorism," Rubio said in a statement.

"Based on what we know thus far, I believe that this deal undermines our national security."

Republican presidential contender Chris Christie hopes Congress will reject the Iran nuclear deal. The New Jersey governor said the deal will lead to a nuclear Iran and Middle East, threatens Israel and the US, and "turns 70 years of nuclear policy on its head."

US Senate Majority Leader Mitch McConnell said the agreement seemed to retain "flawed" elements of a temporary nuclear deal that has been in place between Tehran and world powers.

But the Senate's top Republican promised a thorough review. "The test of the agreement should be whether it leaves our country and our allies safer," he said in a statement.

He also said he believes it would be "hard" to override a presidential veto if Congress rejects the new Iran nuclear deal.

When asked about the chances of passing a "resolution of disapproval", Tennessee Republican Senator Bob Corker, chairman of the Senate Foreign Relations Committee, told reporters: "I understand the heavy lift that's involved."

Corker said the committee would review it closely and he would begin "from a place of deep skepticism" about whether the agreement actually meets the goal of preventing Iran from obtaining a nuclear weapon.

Corker went on to say that he does not expect the full Senate to vote on the Iran nuclear deal before September, after Congress returns from its August recess.

"My guess is we won't actually take a vote on this until after Labor Day," Corker told Reuters in a telephone interview, referring to the US holiday that falls on Sept. 7 this year.

Corker said it was too early to decide how Congress would react to the nuclear deal but said there is "bipartisan concern" about the agreement reached in Vienna on Tuesday.

Obama in May signed a law, authored by Corker, giving Congress the right to review the agreement and potentially sink it by passing a disapproval resolution that would eliminate the president's ability to waive sanctions passed by Congress.

Easing sanctions is an integral part of the deal, under which Iran will curtail its nuclear program.

Under the Iran Review Act, lawmakers have 60 days to review the agreement and decide whether to seek a resolution of disapproval. During that period, plus an additional 22 days in which Obama could veto a resolution and Congress could try to override it, Obama cannot waive the congressional sanctions.

A veto override would require a two-thirds majority in both houses - or 13 Democrats along with all 54 Republicans in the Senate, and 43 Democrats plus as all 236 House Republicans.

Party leaders have said there is no guarantee every Republican would back a disapproval resolution. Sanctions passed by Congress account for the overwhelming majority of those imposed by the United States. US sanctions are especially important to the international sanctions regime because of the country's influence on global trade and banking.

'Congress gave away its power'

The congressionally mandated sanctions can be temporarily waived by the president for national security reasons, which he would do under the deal with Iran. That waiver ability stays in place unless Congress is able not just to pass a disapproval resolution, but override Obama's expected veto of it.

"Congress gave away its power by granting national security waivers with all of these sanctions," Corker said. Congressional leaders have already begun briefings and hearings on the Iran deal. Aides said they want to decide on a course of action this month. Obama administration officials have held hundreds of meetings and briefings for lawmakers and aides in the past four months. Those efforts are expected to intensify now with a deal. Acknowledging the difficulty of passing a disapproval resolution, some lawmakers suggest Congress would do better to consider, and then reject, a "resolution of approval." Defeating such a resolution by a large margin would not affect the sanctions regime, but would send a strong message that the United States is not united behind a "bad" Iran pact and was prepared to act if Iran made moves toward building a bomb, they said. Lawmakers from both parties acknowledged that the debate will not end with the review period this year. Some Republicans have discussed passing legislation to impose more sanctions over Iran's human rights record or for supporting terrorism. The Iran Review Act requires the president, Obama and his successor after the 2016 election, to regularly certify that Tehran is adhering to terms of a deal. There is no guarantee a Republican president, in particular, would do so. Several GOP White House hopefuls have expressed skepticism about the deal.