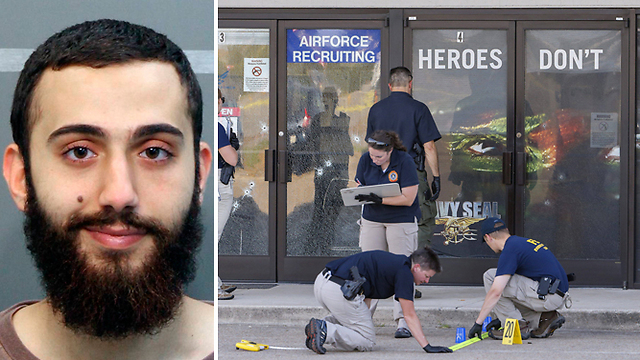 Friend of Mohammod Youssuf Abdulazeez says gunman sent him a text hours before shooting in Chattanooga with a link to an Islamic verse that says: 'Whosoever shows enmity to a friend of Mine, then I have declared war against him'.

Friends of a gunman who killed killed five US servicemen in Tennessee said he was upset about Operation Protective Edge in Gaza last summer and the civil war in Syria.

The suspect, Mohammod Youssuf Abdulazeez, a 24-year-old Kuwaiti-born naturalized US citizen, was killed in a gunfight with police.

"He felt Jordan, Qatar, Saudi Arabia were not doing enough to help, and that they were heavily influenced by the United States," said one friend.

Another friend said, "He had always talked about it, but I'd say his level of understanding and awareness really rose after he came back."

One of the friends received a text message from Abdulazeez hours before Thursday's attack in Chattanooga, a link to a long Islamic verse that included the line: "Whosoever shows enmity to a friend of Mine, then I have declared war against him."

The friend showed the text message to Reuters on Saturday. He said he thought nothing of the message at the time, but now wonders if it was a hint at Thursday's attack in Chattanooga.

The FBI is investigating the shooting as an act of terrorism, but said it was premature to speculate on the gunman's motive.

The rampage has re-ignited concerns about the radicalization of young Muslim men. Abdulazeez's friends said he returned from a trip to Jordan in 2014 concerned about conflicts in the Middle East and the reluctance of the United States and other countries to intervene.

After the trip, he purchased three assault rifles on an online marketplace and used them for target practice, the friends said. "He expressed that he was upset about (the Middle East). But I can't imagine it drove him to this," said the friend who received the text message. Authorities said Abdulazeez sprayed gunfire at a joint military recruiting center in a strip mall in Chattanooga, then drove to a Naval Reserve Center about 6 miles (10 km) away, where he killed four Marines before he himself was shot dead. Three other people were injured, including a US Navy petty officer who died from his wounds on Saturday. The Navy did not give the name of the sailor, but his step-grandmother identified him as Navy Petty Officer 2nd Class Randall Smith of Paulding, Ohio, who left behind a wife and three young daughters. "He was an awesome young man," Darlene Proxmire told Reuters. "He loved his wife and children. He loved the Navy."

Abdulazeez, an engineer, had occasionally smoked marijuana and drank alcohol, and struggled to reconcile that with his faith in Islam, the friends said. At one point, in 2012 or 2013, he received therapy for his drugs and alcohol use, they said. "He used it to de-stress, when things were difficult at home, or whatever," the first friend said, adding that tensions between Abdulazeez and his Palestinian parents had upset him. His parents nearly got divorced in 2009, according to court records. Abdulazeez also had problems with local youths that sometimes took on a religious and racial tone, the friend said.

Mohammod Youssuf Abdulazeez, left, and the scene of the attack (Photo: AP, EPA)
"There were rednecks, ignorant people, who sometimes would cause problems. Mo never fought, but he used to get worked up and yell and stuff," he said. "Afterwards he would calm down, and just say it doesn't matter." Abdulazeez went to the Middle East in 2010 and visited several countries, according to the friend. He then went to Jordan in 2014 to work for his uncle, and lived with his uncle and his grandparents there, the friend said. "That trip was eye-opening for him. He learned a lot about the traditions and culture of the Middle East. He said he really enjoyed it and wished to go back some day." After Abdulazeez returned, he seemed more mellow to his friends, less interested in partying. "That is part of what drew us closer. He was a guy who wanted to settle down and get his life going. That connected us," the friend said.

Abdulazeez had purchased three guns on armslist.com after returning from Jordan, including an AK-74, an AR-15, and a Saiga 12, his friends said. They said he also owned a 9mm and a .22 caliber hand guns. Over the past few months, Abdulazeez and his friends practiced shooting in the Prentice Cooper state forest near Chattanooga, sometimes two or three times a week. "He was always interested in guns, since he was young. He started with a BB gun and paintball, and went on from there. We would go out shooting quite often," said the friend who received the text message. Abdulazeez also liked driving fast in the hills surrounding Chattanooga. Two nights before the attack, he and some friends went joyriding in Abdulazeez's rented gray convertible Ford Mustang, passing through the towns of Whitwell, Dayton and Jasper. "Fast car on a rainy night. We were flying, doing tight turns and drifting," said the friend, adding that they returned home at about 3 o'clock in the morning. "He seemed totally normal. We made plans to hang out on the weekend," he said. The night before the attack, just after 10 p.m., the friend received a text from Abdulazeez with this link to a Hadith, or Islamic teaching. For jihadists and ultraconservative Salafist Sunni Muslims, the Hadith "is usually understood within the context of al-wala wa-l-bara (or) love for Islam and hatred for its enemies," said David Cook, an associate professor who specializes in Islam in the department of religion at Rice University in Texas. It was unusual for Abdulazeez to send such a link, said his friend, who had been asking Abdulazeez for job advice. "I didn't see it as a hint at the time, but it may have been his way of telling me something," he said. He continued to text Abdulazeez that evening and into Thursday but did not get a reply. The friend said he has been interviewed by the Federal Bureau of Investigation. He said Abdulazeez had a good paying job and many plans for his life, including possibly starting a computer sales business in Chattanooga. "He wanted to buy a car. He wanted a video console, to make a man cave - every guy's dream." He said it was difficult to understand how his friend became the suspect in the rampage. "The signs just weren't there," he said. "The only thing I can think of is that it was a combination of things - what is happening overseas, his family problems, maybe some of the issues with the less educated people here. I don't know." After the shooting, the friend texted Abdulazeez, asking him if he had heard about the attack. "I guess he knew about it before I did."