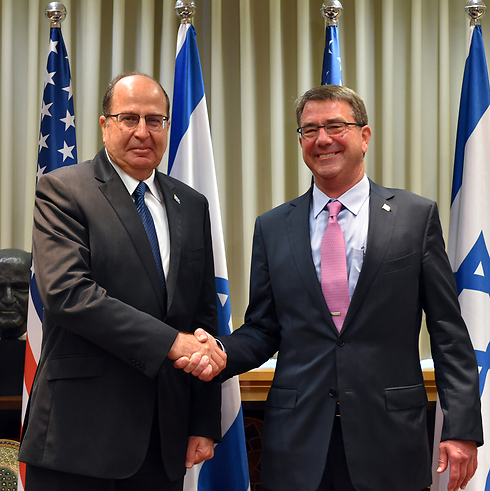 US defense secretary: We will help Israel defend itself

LIVE: Ash Carter meets with Defense Minister Ya'alon upon arrival in Israel, says visit meant to emphasize US has no limits on ability to increase Israel's security.

US Defense Secretary Ash Carter was warmly welcomed by his Israeli counterpart Monday on the first Cabinet-level US visit to the Jewish state since the Iran nuclear deal was announced.

The Pentagon chief met at Israel's defense headquarters with Defense Minister Moshe Ya'alon and on Tuesday is to meet with Prime Minister Benjamin Netanyahu, who has strongly criticized the Iran deal.

In a joint press conference held by the two defense chiefs, Carter said the US would do all it could to help Israel defend itself including continued funding for missile defense, joint training, and advanced equipment like the F-35, which Israel will receive before all other international partners next year.

Carter (right) greeted by Defense Minister Ya'alon upon his arrival in Israel. (Photo: Ministry of Defense)

Ya'alon said Israel "greatly disagrees" with the agreement reached with Iran on its nuclear program. But, he said, "The scope and depth of the relationship between the defense establishments of the United States and Israel is unprecedented – between the Pentagon and the Ministry of Defense, between our armed forces, intelligence corps and defense industries."

The Israeli defense forces held a standard welcoming ceremony for Carter upon his arrival  in Israel. He then went into a closed meeting with Ya'alon. On his flight to Tel Aviv, Carter said he has no expectation of persuading Israeli leaders to drop their opposition to the Iran nuclear deal. But he said he'll emphasize that the accord imposes no limits on what Washington can do to ensure the security of Israel and US Arab allies. 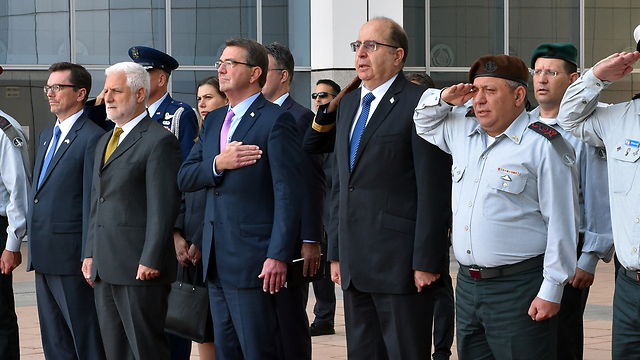 On Tuesday, Netanyahu met Italian Prime Minister Matteo Renzi and spoke of his meeting with Carter. "I told him that the agreement with Iran poses severe dangers to Israel, the Middle East, Europe, and the whole world," said Netanyahu.

"It will put Iran in a position where it can use a nuclear arsenal within a decade." The prime minister warned that removing sanctions would fill Iran's coffers, freeing it to launch terror attacks throughout the world. "This bad deal is a historic mistake," he said.

Netanyahu has argued that the deal clears the way for Iran to build nuclear weapons that would threaten Israel's existence and ultimately diminish US and global security. Even as tensions between the US and Israel have grown over how to contain Iran's nuclear program has grown, the US-Israel defense relationship has deepened in recent years. The US has invested hundreds of millions in an Israeli air defense system known as Iron Dome, designed to shoot down short-range rockets, mortars and artillery shells fired into northern Israel from southern Lebanon and into Israel's south from the Gaza Strip. The US has worked with Israel on anti-missile systems and a wide range of other defenses. Two years ago the Pentagon committed to providing advanced radars for Israel's fleet of fighter jets and KC-135 refueling aircraft, and making Israel the first country to buy the V-22 Osprey hybrid airplane-helicopter.