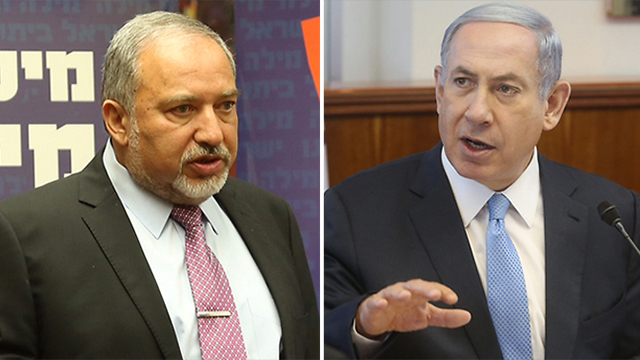 Avigdor Lieberman, who until recently was a foreign minister in Netanyahu's government, doesn't mince words when talking about his former ally now; 'to handle the Iranian issue, you need to be creative, determined, and know how to make difficult decisions, Netanyahu has none of this.'

"We don't need to form an committee of inquiry; we need to replace the prime minister," says MK Avigdor Lieberman, who until recently was the foreign minister in Netanyahu's government and the man that for years was the prime minister's close confidant and ally. Lieberman, was answering the question whether he too, like Lapid, thinks there should be a committee of inquiry that would examine the agreement with Iran, responding in the same monotone, slightly drowsy voice with which he answers questions like; "how are you?" or "how do you feel sitting in the opposition?" "Netanyahu cannot handle the Iranian issue," he says. "And I say this in the clearest way. It's too big for him, this entire issue. I could use all the clichés: 'If you want to shoot, shoot, don't talk' or 'a barking dog doesn't bite.' But the bottom line is that we talked about all of the options so much, that no one is taking us seriously anymore. And now when we start talking about this again, they just laugh at us."

Don't be fooled: Lieberman thinks the deal with Iran is bad. Not just bad, terrible. Not just in the practical sense, but also in the moral sense. In his point of view, the agreement is like the Munich Agreement and the Molotov–Ribbentrop Pact put together.

"A country that clearly states that its ultimate goal is the annihilation of Israel, while Europe supports this - sitting with the Iranians for dinner, shaking their hands and knowing this is their official policy - that is unacceptable. And it signals all the players in the Middle East that it pays off to be aggressive and extremist, because then everyone wants to appease you. I predict a crazy arms race will start now, including the Egyptians, the Saudis and the Turks. And have no delusions: This will lead to the next conflict. Iran feels on top of the world. The agreement recognizes its special status as a regional power and its appetite and audacity will only increase." What should we have done that we haven't? "What should have been done? The cabinet should have made clear decisions. But everything here is blurred, undefined, unfocused. And I had quite a few rifts, some are known and some less so. I remember a conversation I had with Bibi in 2009, before he formed the previous government. I told him: ‘I know what you could do by talking compared to what you could do in practice.’ He is excellent in talking, less so in actions. "What happened when the agreement between Iran and the West was signed was beyond a failure. Netanyahu is incapable and unequipped to deal with it. Period. He knows how to survive. He knows how to talk. He's a great performer. He's a great campaigner. He knows how to make promises he has no intention of keeping. He's a great marketer, perhaps the best we have here. But all of that is not enough to lead a country, and cannot solve the acute problems we need to deal with.” "The problem is not whether to attack or not," Lieberman says. "A national strategy cannot come down to just this. The problem is the lack of clear strategy both on the Iranian and Palestinian issues. In all of my years in the government, I could not get the cabinet to adopt a clear strategy. "Even now Netanyahu is not acting right. It's clear there is no chance to thwart the agreement in Congress. It's all one big mistake, his entire feud with President Obama. There are arguments and disagreements, but you don't need to turn it into a public dispute and have the whole world in on it. You are only proving how isolated we are compared to the Iranians. The United States has a right to think differently. This must not turn into a personal argument, certainly not as a prime minister. You can't keep blaming other people. The Americans are wrong, but from here on out this is our responsibility. The question is, what are we doing. But to throw the blame on them once again is a mistake." Is Netanyahu doing the right thing by refusing to discuss a generous compensation package and security cooperation with the Americans? "I wouldn't reject any proposal from the Americans regardless of anything," he says. "And we should already start talking about this. There are circumstances and regional developments that, even without the agreement with Iran, necessitate a reevaluation of the cooperation and military aid. What good is tying this to the attempt to thwart the agreement with Iran? Instead of getting the most cooperation and aid, after the vote in the Senate we will get the minimal amount of aid. This is the wrong attitude.

'It's all one big mistake, his entire feud with President Obama' (Photo: AP)
"Netanyahu wanted to succeed. He was obsessed with the nuclear issue. But it's too much for him. To handle this issue you have to be creative. Determined. To know how to make hard decisions." "And Netanyahu," Lieberman says, "has none of those things."

This isn't the only critical mistake Netanyahu has made, according to Lieberman. He has harsh criticism regarding the prime minister's conduct during Operation Protective Edge as well. "How can someone who can't handle Hamas deal with Iran? No one is taking him seriously."

"I don't have delusions of grandeur," he says. "But if I were tasked with handling this issue, I'd know how to do it better than anyone in the State of Israel." You? How? Like you wanted to deal with the Tehran-Aswan government? (In 2001, while talking to ambassadors from the former Soviet Union, Lieberman suggested blowing up the Aswan Dam and, while at it, bomb Tehran as well) "I didn't mean to bomb the Aswan Dam," he clarifies. "When I said it, I believed Egyptian president Mubarak would not last and that the regime there would collapse, and that we needed to create deterrence. Today we are in a situation in which we lost deterrence completely. If we can't deal with Hamas, which is at a spitting distance from us, how are we going to deal with Iran? Everyone immediately interpreted it as if I really meant to bomb Aswan and Tehran. But I was talking about issues that were developing. In 2001, I saw where Iran was heading and what was developing in Egypt and I thought we needed to be ready for it. "When Netanyahu stood in front of the residents of Ashkelon in 2009 and said that if he were elected prime minister, he would bring down the Hamas regime, and when he could have he didn't - that was a fatal blow to deterrence. I told Bibi before Protective Edge: 'Either you don’t start this at all, or you go all the way.' But this is one of his biggest problems: He says one thing, and does the opposite. Before the elections he said: 'No Palestinian state on my watch.' After the elections, he ran to foreign media to say he didn't mean it. During the elections he was talking about Arabs going in droves to the polls, and after the elections he invited (head of the Joint Arab List) Ayman Odeh to his office." And why do you think that you could deal with the Iranian issue better than him? "I know the issue well. I've been dealing with it for many years. But it's not just about being familiar with the issue and understanding it. It's also a matter of personality. You need a person here that has the ability to make decisions with determination and creativity." And you are the only person who has this? "There are in Israel other people with quite the potential to lead the country. Good and talented people who are much better than Netanyahu and some of them are better than me in other things. But on the Iranian issue, I'm the most knowledgeable and know best how to deal with it." How? "Of course I don't mean to talk about it in public. But I assure you, I have a detailed plan of what needs to be done. I talked about it in the appropriate forums and will continue talking about it at the Subcommittee for Intelligence and Secret Services, which I am a member of." Needless to say that you agree with Meir Dagan about Netanyahu's personality, but not on the way he thinks Israel needs to deal with Iran? "Netanyahu is wrong on everything that has to do with handling Iran, but I don't agree with what Dagan said." I reminded him that until recently, he was sitting in Netanyahu's government. That he participated in cabinet meetings. And furthermore, that he almost joined the current government. "I have a commitment to my voters. My responsibility is first of all to them. And we need to think about what is best for this country, and what's best for Israel is that there is a stable government. But it's clear to me that we're on a flight going nowhere, that Netanyahu is leading us nowhere. I mean, I was on the inside for six years. I know what's going on in there. I tried to fight from within. It reached a new high during Protective Edge, when I said what I thought during the war. Then we went to elections. What happened, happened. I'm not perfect. It’s possible I should have left long before that. But the fact of the matter is that I made a difficult decision and in the choice between my principles and a seat in the government, I chose to stay out." When I asked how come he was not able to influence from the inside, Lieberman says Netanyahu excluded everyone from these issues and chose to deal with them on his own. "I tried to influence. I spoke my mind. But Bibi wouldn't let anyone come near. He made it his exclusive business. Even when he let Livni deal with the Palestinian issue, he paired her up with a Commissar named Yitzhak Molho. That is why I place the responsibility for the failure squarely on his shoulders."