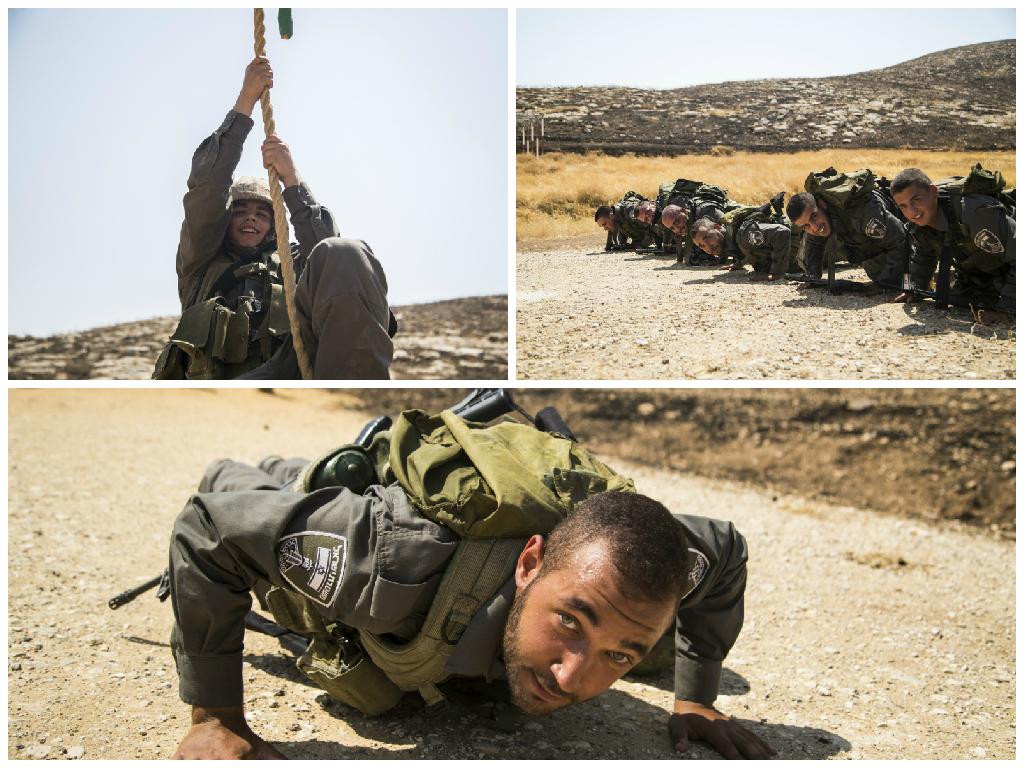 Sixty-eight Border Police overweight trainees undergo 'healthy lifestyle' program; each had a dietician and personal trainer to ensure they would finish boot camp as fighters.

Sixty-eight overweight Border Police soldiers who recently joined the IDF lost a total 565 kilograms as a result of a highly successful special diet program adapted to each individual soldier.

Hundreds of Border Police soldiers from the March 15 recruitment cycle stood excitedly on the roll call ground of the force's training base, waiting to receive their warrior pins at the end of their grueling training.

But for 68 of them there was another reason for excitement – their end of training ceremony was also the end of their diet program, called "healthy lifestyle", which they started at the beginning of their training, and during which they lost a total of 565 kilograms.

During their training, overweight trainees were each given a personal trainer focused on improving their lifestyle to ensure optimal weight loss in order for them to be able to finish the training as fighters.

Lance Corporal Shai Abergil, 18, who lost no less than 21 kilograms - more than anyone else in the program - said that before being drafted, he weighed 120 kilograms. "Despite many attempts I could not lose weight but when I got to boot camp, not only did I lose weight but I also realized the importance of watching one's weight," he says. "If not for the support of the commanders I would not have managed to lose so much weight. Everything is easier for me now, I feel like I have been given a new lease on life."

Lance Corporal Shai Abergil before (on left) and after, lost 21 kilos

Border Police say that a program was built around each participant, during which they met Lital Even, a clinical dietician, on a daily basis. Even has been accompanying the fighters for over a year. In addition, those in the program received many additional hours of training in the gym with professional instructors. In every company, there was a group of about 10 soldiers who took "healthy lifestyle" classes and had weekly weighings in order to monitor their progress.

"Beyond the significant weight reduction, everyone underwent a change in perception. They understood the importance of maintaining a healthy lifestyle and maintaining the progress they made," said Even.

Another trainee who lost a lot of weight is Lance Corporal Niv Elias who said, "Before I was drafted, I weighed 140 kilograms. I knew that to be a Border Police soldier I had to lose weight, and so I did. In a few months I dropped nearly 40 kilograms, but what I did not know was that rapid loss can lead to a rapid gaining back of weight. After much effort, I gained weight and when the recruitment date came around I was hopeless. Since then, I've lost 20 kilos at a fixed rate and today I am a full-fledged fighter and that is all thanks to the program. Even now I will continue the program they set up for me until I get to my desired weight."

Sergeant Almog Tabib, before (on left) and after. lost 20 kilos

Sergeant Almog Tabib, 20, the commander of the battalion of recruits, who accompanied the group and supported its members, added, "When I enlisted I was overweight myself. All of those accompanying the group, from the dietician to the direct commanders, supported us all. I lost almost 20 kilos. After all I got from the program, I knew I would accompany the fighters in my own company to give something back."

According to Brigadier-General Shimon Dadon, commander of the training base, "the project is, from our perspective, first and foremost a project of principles. The goal is to provide equal opportunities for everyone and to show the youngsters that everything is possible. With consistency, determination and desire on the part of the fighters we have had impressive results and now we can say that in addition to training them as fighters at the forefront of Israel's defense force, we provided them with a good starting point for a healthier life."