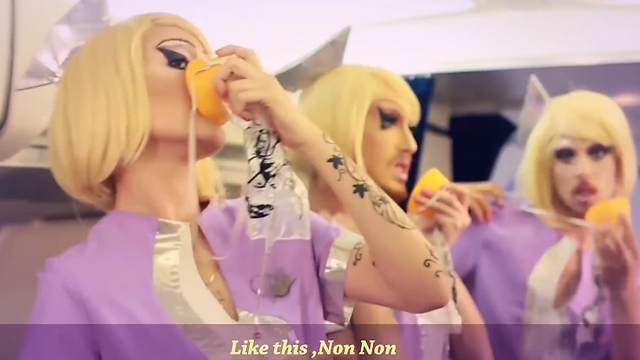 Israeli art student tasked with branding an airline, so she decides to create Priscilla Airlines for the Trans community.

Flight safety videos, the ones you watch before takeoff, have turned into amusing works of art in recent years. So much so, that people all over the world watch the successful videos on YouTube, which garner millions of views. Now forget everything you have seen, and watch the flight safety video for "Priscilla Airlines".

OK, so maybe it's not a real airline, but we are in fact talking about a final project by a visual communications student named Elia Chechick, from the Bezalel arts school in Jerusalem.

"I remember when the movie 'Priscilla Queen of the Desert' came out in theaters," she said in a conversation with Ynet."I watched the movie plenty of times when I was a kid, and it provided me with the inspiration for the project, in all of its elements, from the concept to the bus named 'Priscilla', to the lavender paint - just like branding."

In the clip before you, in addition to the impressive visuals, you can hear the song instructing the passengers on flight safety, which is based on the song "Lets Have a Kiki" by the Scissor Sisters, a big hit within the LGBT community.

Chechick says that over the years she has volunteered at the "Open House" in Jerusalem, from which she drew her love for the drag world. "I have watched drag since I was 16. I wanted to bring it into an official place, like an airline. It was interesting to make an airline accessible to the Trans community, with a summer package where you could book a few destinations and fly from pride parade to pride parade."

What was the actual nature of the project for Bezalel?

"The project was branding an airline, and the safety video is an important element of the flight experience. We created a simple and easy application for ordering flights. I created boarding passes and fliers. It was truly branding on every level. I was even able to get my hands on airplane seats and an airplane service trolley."

Where and how did you film the clip?

"It was a serious challenge to find a place to film the clip, because there aren’t a lot of airlines based in Israel. I just tried to contact all the major companies, private planes, and anything else I could find. We got a lot of 'no'. It took us a few months to find a place.

"El Al gave us access to one of their flight attendant training aircraft, which was the ultimate place to film. Israir also wanted to help us, but their plane wasn’t the right fit for the project. El Al were really great about it, and supported the shoot for 6 hours straight, and for free."

Who are the stars of the video? "They are all friends who volunteered to participate. The main actors are: Didi Hart, who is an old and extremely talented friend; Sapir Tidhar Lahav - who is well known in the lesbian community; and Lady G – Guy Solomon."