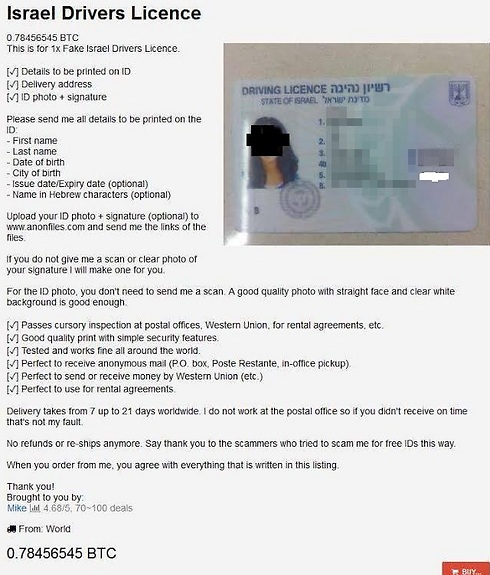 A young woman from the Sharon region in central Israel was stunned to discover that a photo of her driver's license appeared on a darknet (the "secret internet" purported to allow anonymity) page offering to sell an Israeli license for $250.

According to the page, the license has already been sold 70 times.

Identity theft has become a widespread global phenomenon. Rotem Gaz, director of the cyber department at Minufim Investigations, said he recently saw the driver's license on sale online for 0.78456 bitcoins – around NIS 950 ($250).

According to Gaz, the vendor offered an "authentic" Israeli license to customers providing a full name, birth date, city of residence, and, optionally, an expiration date.

"I'm always looking for things on the darknet," said Gaz. "It's interesting to see what things go are on there. It's more common to find a license or passport from the United Kingdom, France, and the United States. But while looking through, I noticed an Israeli license.

"What's interesting here is that he put are real license as a sample," Gaz continued. "Usually when you sell this kind of thing, you use a generic name like Israel Israeli. Besides the picture, I cross-checked all the information on the license and everything is authentic. This young woman exists and doesn't understand how exposed she is right now to online fraud all over the world. There's a chance that if she flies abroad, police will be waiting to arrest her and she won't even understand why. This could have major consequences." Ynet contacted the woman who license was being used. She said she wasn't surprised. "I heard about it, a friend showed it to me," she said. "I don't know what you can do about it, it's already online… I have no clue how it happened." The phenomenon is not at all new to Gaz – his identity was stolen in the past. "Only two and a half weeks ago, I was on an investigation into a drug case, and they claimed that I had brought synthetic cannabis from abroad and showed me my ID card," he said. "Everything was mine, even the picture."

Israel Police released a statement, saying: "Whenever suspicion arises of any criminal offense that occurs on the internet, especially encrypted networks like the darknet, is dealt with professionally and with determination by a trained, certified array of cyber investigators deployed in all police districts and in Lahav 433."