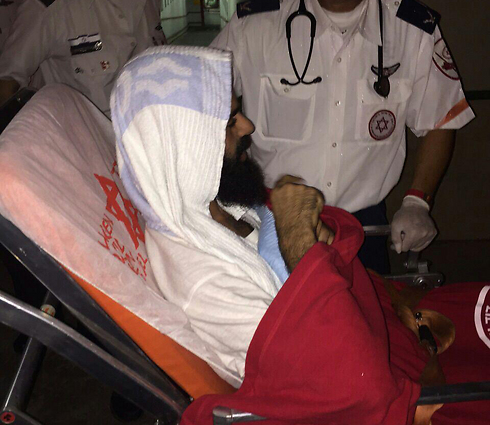 Detainee Mohammed Allaan, who has been on a hunger strike for nearly two months, loses consciousness; Islamic Jihad threatens retaliation if he dies.

Palestinian detainee Mohammed Allaan, who has been on a hunger strike for nearly 60 days, slipped into unconsciousness on Friday morning.

Allaan also suffered convulsions and hallucinations. Consequently, doctors began resuscitation and artificial respiration - the first medical action performed on Allaan since his hospitalization at the Barzilai Medical Center in Ashkelon earlier this week.

The hospital said he had been put on a respirator and a saline drip and his condition was stable. He was also taken for a CAT scan.

The military wing of Islamic Jihad, the al-Quds Brigades, said Friday afternoon that it would attack Israel if Allan dies. "If he dies, we will respond with force and put an end to our commitment to maintaining calm," said a statement.

Allaan, 31, of a West Bank village of Einabus, has been detained since November last year on suspicion of involvement in Islamic Jihad terror activity and other charges that, according to his lawyer, are unknown to him.

"The condition of Mohammed Allan deteriorated this morning. He is receiving treatment and his condition is stable. The treatment is being administered according the ethics committee guidelines and includes respiration and intravenous fluids and saline," the hospital said in a statement.

It said that a doctor from the International Committee of the Red Cross had come to the hospital.

Following the deterioration in Allaan's condition, several Joint Arab List MKs arrived at Barzilai, including Hanin Zoabi and Ahmed Tibi. On Thursday, doctors and Red Cross paramedics tried to convince Allaan to end his hunger strike due to the high risk it poses to his health, but he refused.

Even before he lost consciousness, doctors estimated that the next few days were going to be critical. On Thursday, doctors reported Allaan was suffering from joint pain and that his eyesight was damaged, saying it was unclear whether the damage could be undone.

Allan's lawyer, Jamal al-Khatib, confirmed that an imaging test was done to determine if he is in a coma: "We regret that the situation has come to this. At this stage, it is unclear whether he will be forced-fed or not."

In Gaza, the Islamic Jihad militant faction said it would hold Israel responsible if Allan died and hinted it could respond with violence.

"In view of (Israeli) intransigence and their rejection of the demands of Mohammed Allan we hold them fully responsible for his life and if he dies, it will force us to defend our people and our prisoners," a statement said.

Doctors, who hitherto have not treated him, expressed concern to Allaan's family that he may suffer disability in the future. Allaan's mother, meanwhile, has been at his bedside, supporting her son and encouraging him to continue his protest. According to medical teams, she even calls him a "Shahid" (a martyr).

"He is determined to continue his hunger strike despite of life threatening," Allaan's father, Nasser, said of his son. "Now he is in hands of his God and all what we can do is praying to God to protect his life."

"Once Allaan lost consciousness, medical ethics dictate that the treating physician should act in accordance with his understanding of the patient's will and to his discretion," NGO Physicians for Human Rights said.

"We hope and believe that the doctors at Barzilai acted accordingly and respected Allaan's wishes. This situation was not inevitable. A dialogue could have been held and an agreement reached that would have stopped this deterioration. This is the point when the political leadership must make a decision to release Allaan from administrative detention and allows his physicians to concentrate on the fight for his life."

It remains unclear whether Allaan will become the first Palestinian to be force-fed in accordance with legislation approved in the Knesset last week with a majority of 46 supporters and 40 against. According to the new law, the state would be empowered to force-feed hunger-striking prisoners whose lives are in danger, even if they don't agree to it.

Force-feeding is usually carried out in two ways: Inserting food using a feeding tube directly into the stomach. Another way, which is rarely used, is feeding through the arteries - inserting a feeding tube into the aorta or an artery in the groin.

Critics say it is akin to torture and Israel's Medical Association has urged physicians not to cooperate with the measure.

Palestinians prisoners have held rounds of hunger strikes over recent years, which have flared tensions on the streets. Israel fears a hunger striking prisoner's death could spark violence.