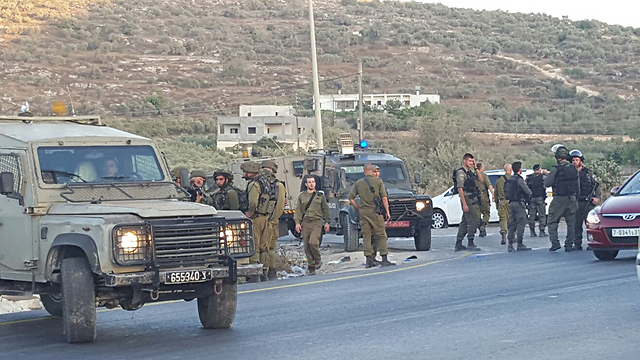 Palestinian man shot dead while attempting to stab a border policeman at the Tapuch junction, the third such incident in a matter of days.

In the third incident of its type in a week, a Palestinian terrorist was shot and killed after attempting to stab a Border Policeman at the Tapuach Junction in the West Bank on Monday.

The junction is roughly where another Border Policeman was stabbed on Saturday by another Palestinian perpetrator.

Police said the attacker, Mohammed Amsha, 25, from a village near Jenin, arrived at the Tapuach Junction checkpoint and told the Border Police soldiers stationed there that he was feeling unwell.

The troops instructed him to approach so they could help him, but once he came within a short distance of them he pulled out a knife and attacked to stab one of the soldiers.

The soldier was only lightly wounded and succeeded in pushing the attacked back, while another Border Policeman shot and neutralized the attacker.

Tapuch after the attack (Photo: Rabbies for Human Rights)

"During the afternoon at the checkpoint, me and my fellow fighter detected a suspicious individual moving from Ariel towards Nablus," said the Border Policeman who was wounded.

"In our initial questioning he told me he was from Jenin. I asked for his identity card and he took out the knife."

The Border Policeman, who saw the knife, pushed the terrorist back. "The terrorist then ran towards me with the knife brandished and tried to stab me in the head. I then cocked my weapon and neutralized him. Simultaneously, a soldier came to help me."

"We were ready and prepared and that is why the event has ended this way. It only took a few seconds, so vigilance and operational readiness are the only way to confront these events. My injury was superficial. I'll get quick treatment and return to my duty," said the Border Policeman.

Border Police commander, Major General Amos Yaacov, praised the fighters on the quick operational response noting: "Nearly 48 hours had passed since the first stabbing attack when a Border Policemen neutralized the terrorist who tried to stab them, a couple of kilometers from here. Time after time, our fighters demonstrate their professionalism, vigilance and determination. Within seconds they dealt with the incident and neutralized the terrorist. I came here to tell the soldiers that they acted exactly as is expected of fighters."

The incident bears a striking resemblance to two other incidents last week in which a Palestinian man attempted to stab a Border Policeman on Saturday near the same junction. That incident also ended with a soldier lightly wounded, and an injured Palestinian attacker.

Earlier that day, a Palestinian stabbed an Artillery Corps soldier after asking the guards at the checkpoint for water, wounding him lightly, at a checkpoint by Route 443 near Beit Horon.