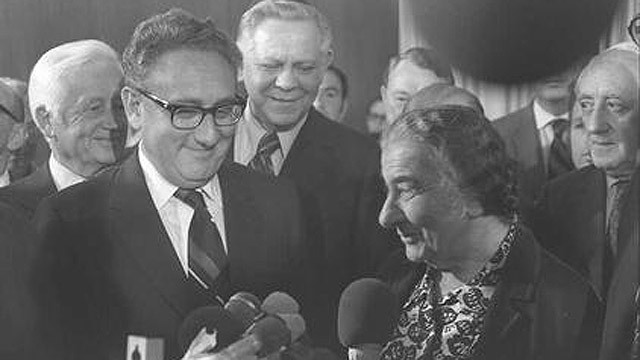 Gov't papers dating from 1969-72 reveal American discussions about how to convince Israel to abandon pursuit of atomic weapons and to sign the non-proliferation treaty.

The US State Department published last week a volume documenting its Israeli foreign policy in 1969-72, which dealt directly with development of Israeli nuclear weapons, as well a possible American responseto a Soviet invasion of Israel.

The documents deal with secret meetings on the subject of Israeli development of Jericho surface-to-surface missiles with nuclear warheads, and the American decision to force Israel to quickly stop the project.

The volume was compiled using presidential papers and White House records, and in particular the files of the National Security Council, including memoranda sent to President Richard Nixon by his Assistant for National Security Affairs Henry Kissinger.

The Nixon administration established an ad hoc special review group to consider discussions with Israel on its nuclear program, whose position paper provides insight into the US government's approach to dealing with the question of Israeli nuclear weapons.

This paper was attached to a July 12 memo sent by the NSC's secretary to government officials, the Pentagon and the CIA. The document was to serve as the basis for a special meeting to discuss the Israeli nuclear issue, but President Nixon canceled the meeting and instead the document served as a basis for a meeting between National Security Council officials with Ambassador Yitzhak Rabin on the "issue of nuclear weapons".

Fears of a nuclear Israel

The committee's position paper states that US objectives were to convince Israel to sign the Non-Proliferation Treaty (NPT) "at an early date (by the end of this year) and ratify it soon thereafter" as well as to assure in writing that it would not the first to introduce nuclear weapons in the region and assure in writing that it will stop production of Jericho missiles "or any other nuclear-capable strategic missile".

The paper also notes that the agreement does not enter into force immediately because the procedure of obtaining signatures takes from six months to a year and "even after the Treaty is in force it gives a signatory six months to enter negotiations with the IAEA for a safeguards arrangement, and it gives the signatory an additional 18 months to conclude those negotiations. We need the bilateral assurances to cover the interim and we should do our best to get them."

Regarding the matter of the Jericho missiles, the paper concedes that "if the Israelis show a disposition to meet us on the nuclear issue but are adamant on the Jericho missiles, we can drop back to a position of insisting on non-deployment of missiles and an undertaking by the Israelis to keep any further production secret," but also wished "to question the purpose of Israel developing and deploying a nuclear weapons delivery system—the 'Jericho' missile—which can only cast doubt on its nuclear assurances." The paper claims that Israel had 12 surface-to-surface missiles, and could have a total of 24-30 by the end of 1970.

The document further stipulates that talks with Israel should occur in Washington. The talks were conducted between Ambassador Rabin on the Israeli side, and Under Secretary of State Elliot Richardson and Deputy Secretary of Defense David Packard.

The documents also show that the Americans decided to avoid explicitly conditioning delivery of F-4 planes on the nuclear issue during their first meeting with Rabin. They assumed Rabin's tactic would be "to test how serious we are by refusing initially to go beyond the line Israel has taken with us in past meetings… If he is unresponsive in this fashion, the Under Secretaries would make clear their dissatisfaction and ask Rabin to call again in five or six days time to continue the dialogue. "

The government expected Prime Minister Golda Meir to meet President Nixon, but the Security Council expressed concern that she would argue that failing to provide the F-4 planes would hurt Labor's chance to win the election.

A July 19, 1969 memo from Kissinger to Nixon noted that "when the Israelis signed the contract buying the Phantom aircraft last November, they committed themselves 'not to be the first to introduce nuclear weapons into the Near East.' But it was plain from the discussion that they interpreted that to mean they could possess nuclear weapons as long as they did not test, deploy, or make them public."

Kissinger argued that public knowledge of Israeli nuclear weapons "is almost as dangerous as possession itself. This is what might spark a Soviet nuclear guarantee for the Arabs, tighten the Soviet hold on the Arabs and increase the danger of our involvement… What this means is that, while we might ideally like to halt actual Israeli possession, what we really want at a minimum may be just to keep Israeli possession from becoming an established international fact."

The national security advisor added that the goal was to get Israel to sign the NPT, "not because signing will make any difference in Israel’s actual nuclear program because Israel could produce warheads clandestinely," but to give the US a "publicly feasible issue to raise with the Israeli government—a way of opening the discussion. It would also publicly commit Israel not to acquire nuclear weapons."

The memo also stated that the Defense Department believed the US "could live with the existence of Israeli nuclear weapons provided they were not deployed" and thought that the F-4 planes should be used as leverage to convince Israel to cease producing missiles.

Israel and the Arabs

Earlier, on February 1, 1969, President Nixon convened the NSC's senior staff, Secretary of State William Rogers, Secretary of Defense Melvin Laird, Chairman of the Joint Chiefs of Staff General Earle Wheeler, CIA Director Richard Helms, and others for a meeting on the Arab-Israeli conflict in general. The minutes of this meeting show how US policy took shape as officials considered their options in a time when a proxy war in the Middle East between the US and the USSR could turn into a much larger conflagration.

Helms opened the meeting by providing an overview of Arab-Israeli relations, Arab nationalism, and the terror organizations that were "adamantly opposed any solution other than the destruction of Israel. Their influence makes it questionable whether any Arab government could reach settlement with Israel. Current significance is that terrorism brings on Israeli reprisals, which raise likelihood of broader conflict," said the CIA director.

Helms described Arab attitudes towards the US as increasingly hostile, believing the superpower to be backing Israel. While the US image was good in Israel, said Helms, it had its own brand of reservation about our inability to see the Arabs through Israeli eyes."