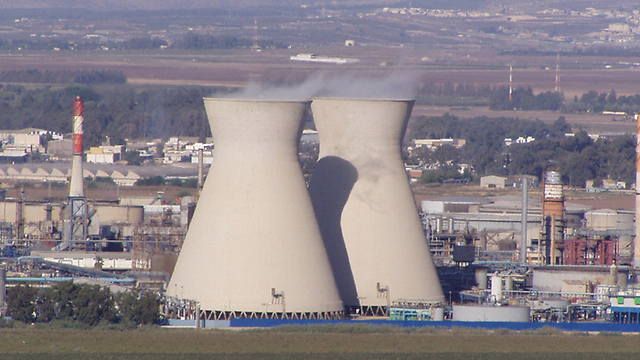 Report finds pollution from private vehicles to be one of the main reasons for 25,000 premature deaths annually in Israel.

A recent study conducted by Israel's Environmental Protection Ministry ranks Tel-Aviv and Haifa at the top of the list of cities which have the most air pollution when compared to European cities.

The report shows that these cities suffer from air pollution due mostly to small breathable particles, defined by the World Health Organization as carcinogenic. Jerusalem also made the list, coming in fifth place after Prague and Marseille.

The Environmental Protection Ministry officially released Thursday the air quality data for 2014. The main report, revealed by Yedioth Ahronoth, was accompanied for the first time by a comparison of air pollution data of major European cites done by the agency.

"The main problem is that Israel does not have a clean, accessible public transportation system which can serve as an alternative to private vehicles" said Shuli Nezer, deputy director-general of the Environmental Protection Ministry.

The Environmental Protection Ministry emphasized that the most important figure indicated by the comparison relates to the monitoring of particles in the air near the major central transportation hubs.

"These particles carry various pollutants which they absorb from the air, including black carbon, organic carbon and heavy metals emitted from burning fuels and biomass (the total mass of organic matter)," said Nezer.

The agency's report indicates that a major source of morbidity and mortality from pollution in Israel are small breathable particles, which have been classified by the World Health Organization as definitely carcinogenic to humans. Nezer points out that an OECD report published last year estimated that in Israel about 25,000 people die prematurely from exposure to these pollutants, and approximately half of these deaths are attributed to exposure to air pollution caused by vehicles.

"It's a lot more difficult to deal with transport," said Nezer. "Vehicles emit pollution at low altitudes, therefore the damage they cause is greater than industrial emissions that occur at a height of tens of meters. We need clean and accessible mass transit systems, and then we can incentivize drivers to leave behind their private vehicles.

"If one takes into account the high concentration of particles from dust storms and other sources added to that the fact that the world's major cities have mass transit and transportation here is almost all private, it leads to a situation in which our air pollution is among the highest in the world."

The data held by the Environmental Protection Ministry refers to the year 2012 and ministry officials say that the situation has worsened since. After Jerusalem in fifth place in the ranking comes Rome, Hamburg, Antwerp, Munich, Amsterdam, Madrid, London, Rotterdam and Lisbon.

Regarding other pollutants studied, such as carbon monoxide and nitrogen dioxide, Israeli cities ranked lower on the list, but the ministry says that the measure of tiny particles is the most essential. The report revealed in the past by Yedioth Ahronoth discovered that all Israeli cities have abnormally high concentrations of carcinogens in the air originating from industry, transport and emissions from power stations.

Next week Environmental Protection Minister Avi Gabay is supposed to present the government with the plan to reduce polluting emissions in Haifa, which was prepared due to the high concentrations of morbidity there.

"Dramatic change is needed in the treatment of air pollution caused by vehicles and industry in Israel. The Haifa Bay action plan is just the beginning, and we shall carry out firm measures in other cities," said Gabay.