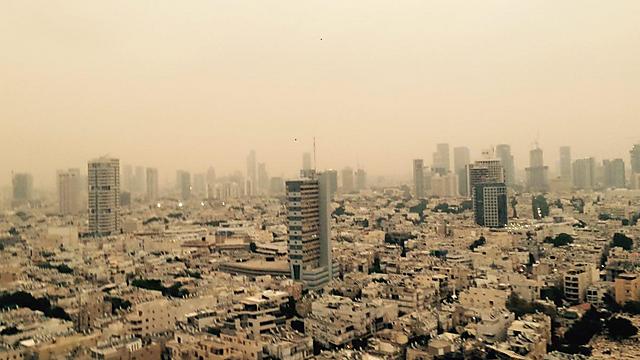 Israelis woke up to a morning of yellow skies and exhausting heat, with the country being covered by a massive Middle Eastern sand storm; Environmental Protection Ministry warns against physical activities outdoors.

Heavy haze caused by a sand storm sweeping over the Middle East hung in the air throughout Israel on Tuesday morning, causing disruptions to domestic flights and leading Arkia and Israir to cancel all of their flights for the day on its Tel Aviv-Eilat line.

At least 10 flights have been delayed on the ground in Eilat because of the weather conditions.

High concentrations of breathable particles were measured in the early morning hours in areas ranging from the Golan Heights to Jerusalem. The haze will continue to spread across Israel throughout the afternoon hours, leading the ministry to issue a warning against conducting physical activities outdoors.

The sand storm in Tel Aviv (Photo: Adam Evenhaim)
The Environmental Protection Ministry has cautioned anyone suffering from heart or lung conditions, as well as senior citizens, children, and pregnant women, from conducting strenuous physical activity outdoors. The warning additionally stated that students should avoid conducting physical activities outside of the classroom, cautioning that in severe cases, the pollution could lead to death.

Dr. Levana Kordova, scientific manager at the Environment Ministry's Air Monitoring Center, explained that, "In the next few hours, the haze will cover all of Israel. We will continue to track and monitor developments. For sensitive populations, short term exposure to such dense clusters of particulates can cause a stroke, heart attacks, and even death. The storm comes in addition the existing high heat and high humidity."

Sand storm in Tel Aviv (Photo: Moti Kimchi)
According to Dr. Kordova, "Schools should avoid exerting the students, and sports classes should be held in indoor halls."

Thick haze (Photo: Elior Levy)
The ministry explained that the tiny particulates make their way into our lungs, to the area in our bloodstream where our body conducts the oxygen to carbon dioxide exchange, leading to various possible medical conditions.

We aren’t alone; several of our neighboring countries were already hit with the system on Monday. Different areas of Syria suffered the effects of the sand storm, which was severe in its scope and intensity, and caused decreased visibility across the country. Syrian official state media outlet Sana managed to break away from its reporting on the civil war to cover the storm.

Sand storm in Syria (Photo: Reuters)
Pictures published in local media showed people wearing masks and pieces of cloth on their faces in an attempt to prevent the particles from entering their lungs.