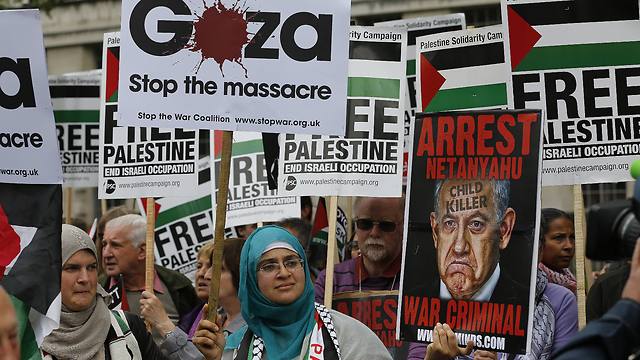 Netanyahu arrives in the UK to discuss regional security cooperation with British Prime Minister Cameron after UK guarantees his diplomatic immunity as a visiting head of state.

Prime Minister Benjamin Netanyahu and his wife Sara have arrived in London on Wednesday in order to hold talks aimed at strengthening security cooperation with British Prime Minister David Cameron.

Europe should see Israel as a partner in confronting the "mediaevalism" of militant Islam rather than criticizing it for its policy towards the Palestinians, Netanyhu said before embarking on the trip.

Speaking after meeting European Council President Donald Tusk and before flying to London for talks with David Cameron, Netanyahu said Israel, like Europe, was under threat from violent Islam and the two needed to stand together.

"We're challenged by the opposite of modernity, which is a barbaric mediaevalism, early mediaevalism, primitive, savage, murderous, that comes from the two sources of militant Islam," he said, referring to Sunnis and Shi'ites.

"Europe should support Israel - not pressure Israel, not attack Israel, but support Israel, which is the only real shield that Europe and the Middle East have against extremist Islam, which is surging," he told reporters.


The prime minister went on to say,"We are prepared to act together with Europe in Africa and other places to fight extremist Islam but this requires a change of approach. This change will take time but we will implement it. This will be one focus of my talks with David Cameron."

The trip did not go unchallenged by the numerous vocal pro-Palestinian groups in the UK, with some 300 demonstrators waving flags and "Free Palestine" banners during a noisy protest in central London against Netanyahu's visit.

Minor scuffles with police broke out as they surged into the main road outside the Downing Street residence of the British premier, who will hold talks with Netanyahu on Thursday morning.

Already 107,000 people in Britain have signed an online petition for Netanyahu's arrest after last year's fighting between Israel and Hamas in Gaza.

Photo: Reuters
"We're here because we feel that Netanyahu should pay for his war crimes," said 21-year-old student Marion Tehami. "We're here to protest and let him know that he's not welcome in our country."

A short distance away in a separate cordoned off area, about 50 pro-Israel demonstrators waved the Israeli flag.

Britain says visiting heads of state have immunity from legal process and thus cannot be arrested.

Cameron on a previous trip to Israel (Photo: Haim Tzach)
In a statement, the government said on Tuesday: "We recognize that the conflict in Gaza last year took a terrible toll. "However the prime minister was clear on the UK's recognition of Israel's right to take proportionate action to defend itself, within the boundaries of international humanitarian law."

Reuters contributed to the writing of this article.