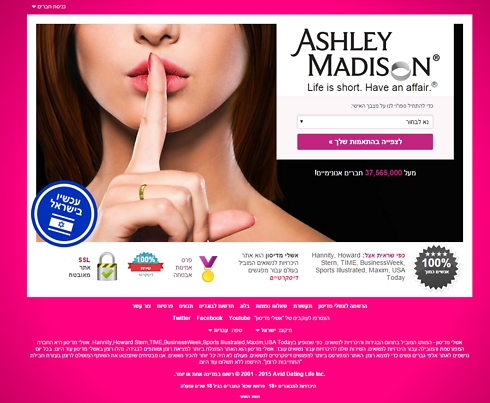 The man, whose details were exposed as part of the site's recent hack, is suing he site for personal damages of NIS 500,000.

A married Israeli man who had an account on famous infidelity dating website Ashley Madison has filed a lawsuit against its operators after his details were exposed publically.

Ashley Madison was recently hacked, and the details for many of its members were released, including at least one member of the Knesset.

The lawsuit claims that the man's privacy was infringed upon, and that he should be personally compensated in the amount of NIS 500,000. The total lawsuit is for over NIS 2.5 million.

"The relationships a person has, their sexual fantasies, their sexual behavior, ways for finding partners, details of their credit card and their picture - are interests that are tied to the core of the right to privacy. A person's very connection to this website causes damage to their life, family, work, reputation, and more," claimed the plaintiff through his lawyers.

Ashley Madison. The plaintiff claims the site did not take appropriate steps to protect users.

The plaintiff claims that Ashley Madison is a dating site that is mainly marketed to married people, so that they can start affairs, "therefore, the site's users expect their private information to be secured in the best possible way. In fact, users wouldn't have agreed to use the site had they not believed that their privacy would be the utmost secret. A group of hackers broke into the site's database and copied a large amount of user information from it, thus causing heavy damages to members of the group. In addition, details - some highly intimate - have leaked, such as users' sexual desire lists, users' body types, and more. These were accompanied by users' identifying details (email, place of residence, etc.). This information is private and sensitive, by any standard."

On July 20, a group of hackers managed to copy the details of about 37 million Ashley Madison users from the website's database. The information they gathered includes personal user details, their payment methods, identifying details, and more.

After the copy was done, the hackers threatened Ashley Madison's operators, saying that if the site was not permanently shut down, they would release the information online.

"The site's operator refused, and the hacker group realized its threat and spread about ten gigabytes of personal user information online. The defendants could have prevented the hack and the damage that was done to group members, if they had taken appropriate actions to protect the sensitive information they held. The plaintiffs did not tell their users in real time about the information theft by the hackers. The exposing of the information caused a media frenzy worldwide. Israel too had media bodies that covered the events," say the plaintiff's lawyers.

The site has not yet responded to the suit.