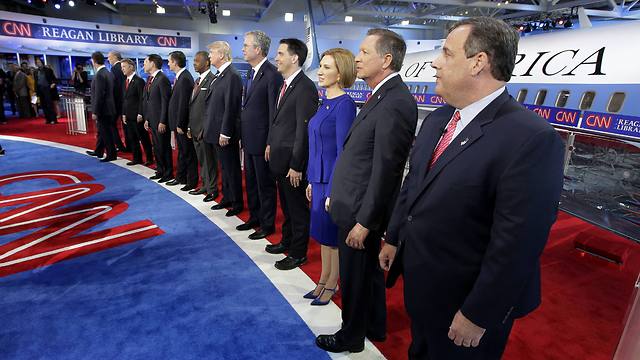 'We've got your back Bibi'

The Middle East, Russia, and the US -Israel relationship played central roles in Thursday's Republican candidate debate, with a strong show of support for the Jewish state.

Washington - Eleven presidential candidates met on one stage on Thursday, at the Ronald Reagan Presidential Library in California, in the second televised debate for the Republican party where Israel's security turned into a key talking point.

The second debate was similar to the first, largely characterized as 10 candidates vs. the frontrunner, Donald Trump, who has managed to capture the support of conservative voters, leading with over 30% in recent polls.

The CNN debate was a battle for survival for some of the other candidates. Surprisingly enough, the three leading candidates going into the debate are not even politicians; Donald Trump the real estate mogul, Dr. Ben Carson the neurosurgeon, and HP's former CEO Carly Fiorina.

These three hold a collective 51 percent of the vote according to recent polls. Fiorina, the only woman on the stage, seemingly outperformed her male peers during the debate.

Among other major issues, the Iran deal and relations with Israel stood at the heart of the debate.

Jeb Bush declared that, "We need to make sure that they have the most sophisticated weapons to send a signal to Iran that we have Israel's back."

Senator Marco Rubio strengthened the sentiment and attacked President Barak Obama. "We have a president that is more respectful to the ayatollah in Iran than he is to the prime minister of Israel."

Carly Fiorina, currently ranked third in the polls promised that, "On day one in the Oval Office, I will make two phone calls, the first to my good friend to Bibi Netanyahu."

Some of the candidates, led by Senator Ted Cruz, promised to cancel the nuclear deal with Iran on their first day in office. Governor John Kasich replied saying, "I think it's a bad agreement, I would never have done it, but cancelling it would be playing to a crowd."

Senator Rand Paul replied stating that, he would not "cut it up without looking to see if whether or not Iran has complied."

On the issue of the Russian deployment to Syria, Trump warned that, " Putin has absolutely no respect for President Obama. Zero. I will get along - I think - with Putin, and I will get along with others, and we will have a much more stable - stable world."

Senator Marco Rubio also answered the question saying, "He's trying to reverse the fall of the Soviet Union, and exploiting a vacuum that this administration has left in the Middle East."

Fiorina later "swung" at Trump, who didn’t know the difference between the Kurds and the Quds force in an interview last month, saying, "It is critically important that every one of us know General Suleimani's name."

The candidates statements on Israeli-American relations played a central role in the debate, In addition to Fiorina's comments about Netanyahu and Bush's stern warning to Iran, Mike Huckabee also stated that, "This (the deal) threatens Israel immediately, this threatens the entire Middle East, but it threatens the United States of America.

"And we can't treat a nuclear Iranian government as they have sponsored terrorist groups, Hamas and Hezbollah, and they threaten the very essence of Western civilization."

Senator Ted Cruz also promised that when he enters office, "The American embassy in Israel will be in Jerusalem."