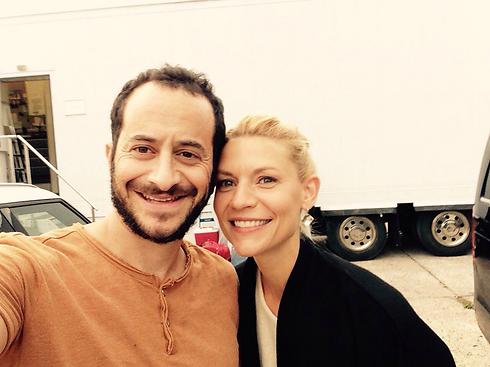 No less than six Israelis filmed scenes for the upcoming season of the acclaimed hit TV show; they tell Ynet about working with star Claire Danes and why Jewish actors play Arabs so often in Hollywood.

The fifth season of hit TV show "Homeland" may be taking a step back from the Middle East, but no less than six Israeli actors are to appear in new episodes.

"Claire Danes told me she likes Israel very much, loved the food – she wants to come back here," Israeli actor Uri Yaniv says of the award-winning actress, with whom he worked for three weeks when he played an Iraqi.

Other than conversations about Israel, Yaniv remembers an accident that occurred on set. "I ran into a taxi on the set," he says. "I didn't know what to do, and then Claire reassured me and said she had messed up a car three times on set and that everything was fine. They told her they won't let her drive in scenes anymore. She jokingly made fun of me about it a lot later."

Uri Yaniv gets a selfie with Claire Danes
Most of the Israeli actors will appear in one episode of the upcoming series (unless they end up on the cutting room floor). Besides Yaniv, the actors who filmed scenes included Oshri Cohen, Reymonde Ansellem, Hadar Ratzon, and Uriel Emil.

Actor Mark Ivanir, however, landed a more substantial role: He is set to be in at least half of the season's episodes and will play a senior member of Russian intelligence.

"They're very secretive over here," Ivanir tells Ynet from the set in Berlin. "I think I'm supposed to film with Claire Danes next episode. We meet in make-up and table reads before the episodes and she's lovely."

Despite the Israeli representation, most of these actors were on set for only two or three days, says Ivanir.

Reymond Amsalem says the same thing. "I arrived for four days," she says. "We did fittings and makeup consultations, a read-through, we shot the scene, and I came back to Israel."

Much like many Hollywood productions, many Jewish Israeli actors play Arab characters. Yaniv, who played an Iraqi, talks about the decision to cast him: "I asked one of the producers why they are inviting we Israelis to play Arabs. He told me it was the look, first of all, and second of all – they prefer Israelis and Iranians because it's easier to communicate in English.

It was no coincidence that Israeli actors ended up on set. "The producers specifically asked for Israeli actors," say sources involved in the casting process. "We told actors to film auditions and send them to the producers, and we would choose whoever they liked."

This was not the first time Israelis acted in the show. Previous seasons features actors like Yael Sharoni, Clara Khoury, Hisham Suliman and others. And of course, "Homeland" is based on Israeli TV show "Hatufim", and parts of the first and second seasons were filmed in Israel.

Casting sources say that Gideon Raff, one of the creators of "Homeland", encourages casting of Israelis.