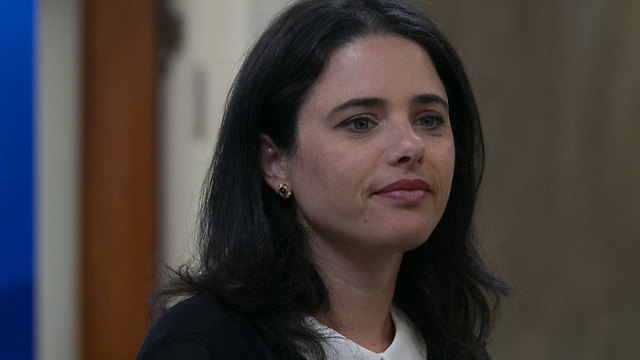 In the wake of heightened Palestinian violence, justice and welfare ministers wish to repeal clause that protects parents of convicted minors from being held liable.

Two cabinet ministers on Thursday proposed a bill to allow for the fining of parents of convicted minors, in an attempt to put a cap on a recent increase in stone-throwing incidents.

The amendment to Israel's criminal codex, which was submitted by Justice Minister Ayelet Shaked and Welfare Minister Haim Katz, invokes the parents' responsibility in cases where minors are convicted of throwing stones.

According to the amendment, the minors' parents will incur substantial fines in the tens of thousands of shekels, in addition to punishments handed down to the children.

According to the law as it stands today, parents cannot be fined or forced to pay compensation to victims, if their children are convicted and punished for their crime.

The only time that fines are enacted is when the children are not convicted on the charges brought against them. This was mainly done to allow the children to rehabilitate themselves without carrying a criminal record for the rest of their lives.

If the amendment is passed, courts will be able to fine the parents even if their children are convicted.

"We have been living in an absurd situation to date," Shaked explained. "This amendment puts an end to the absurdity, and places the responsibility on the parents' shoulders, which forces them to be aware of their children's actions, while allowing courts to seek fines or compensation for the victims."

The framework of the amendment includes a clause which prevents courts from seeking fines before they have allowed parents a chance to express their pleas. If the parents prove that the minor acted on his own recognizance – and not due to their neglect or support, while proving that they actively sought to change his ways – then the courts will reevaluate the decision to fine them.

"This is a very important step in the struggle to contain the growing phenomenon of rock throwing," Shaked said, "Every year, hundreds of indictments are submitted against rock throwers."

"In recent years, there has been a sharp increase in these crimes, and nearly half of all indictments submitted by the Jerusalem district prosecution are against youths," Shaked concluded. Welfare Minister Katz, who participated in writing the amendment, emphasized that "Throwing stones on a moving vehicle is an act of terror, and the government is committed to protect the safety of its citizens."

According to him, "The amendment is one of the ways to contain the phenomenon, while returning the quiet to the streets of Jerusalem."

The AG additionally approved the use of live fire using typically less lethal Ruger .22 caliber rifles in Jerusalem and the West Bank.

In the debate which was held by Netanyahu, the government decided to reevaluate the opening of fire regulations against stone and firebomb throwers.

Alexander Levlovich was killed in a rock attack on his car (Photo: Arik Abolof, Jerusalem Fire Services)
The debate occurred against the backdrop of increasing violence throughout Jerusalem. A bus driver was lightly wounded Thursday night in the city when stones hit his bus near the Hizma checkpoint. He was treated by a paramedic team and taken to Shaare Zedek Medical Center. Another bus was also pelted with rocks in the Palestinian district of Ras al-Amud in East Jerusalem, leading its Arab driver to flee and seek help from a nearby police car. Earlier this week, an Israeli was killed when his car veered off the road after it was hit by stones while driving home from a Rosh Hashana dinner. Police on Friday reinforced their presence in the eastern and western parts of the city, and entrance to the Temple Mount has been restricted to Muslim men over the age of 40 in anticipation of clashes after Friday prayers.