Senior EU source: We may consider steps beyond labeling products

Labeling goods from settlements is meant to deter people from moving to them, says source, and does not constitute a boycott of Israel.

An imminent move by the European Union to label Israeli goods produced in settlements is aimed at discouraging people from living in settlements, a senior European source told Ynet. The source emphasized the decision had already been made and that instructions were expected to be released in October, although they could be delayed until November. He said that if Israel continues its policy of expanding settlements even after products are marked, the EU will consider additional measures. 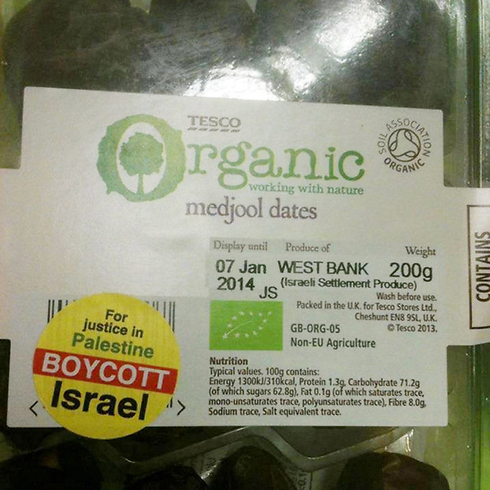 Product marked as made in West Bank (Archive photo)
"The settlements enterprise is flourishing today, but you must understand that this is the reason that relations with Israel have been frozen since 2008," he explained. He said that despite disagreements, Israel and the European Union agree on 85 percent of issues: "The EU sees Israel almost as a member of club and wants to include it, but expects it to make progress with the Palestinians. Unfortunately, the diplomatic deadlock is only getting worse. We offered you a similar status to that of Switzerland, but you prefer the settlements."

The source argued that labeling products is not a boycott of Israel or punishment of settlers. "We do not want to increase the settler's suffering," he said. "Our measure is against the Israeli government, which gave incentives for settlers to go live there. This step is against the government's policy. Labeling products is about the Israeli government's settlement policy which has continued for years despite our warnings. Israel insists on using the term boycott, but it's really not a boycott."

He estimated that exports from settlements to Europe are valued at EUR 100-150 million a year.

Regarding the claim that labeling products would lead to Palestinian workers being fired, he said: "I am very sorry if that happens, but you have to look at the overall picture. The Palestinians live on only 40 percent of the West Bank and Israel controls 60 percent. As far as we're concerned, we are providing another incentive not to live in settlements."

Israel is preparing for a diplomatic campaign and considering measures such as: Having Israeli embassies help settlements export goods; a diplomatic offensive to convince certain European countries to postpone labeling products for a few years; and distributing legal opinions determining that the European initiative would not be binding for different countries.

Deputy Foreign Minister Tzipi Hotovely said that "from Israel's perspective, mentioning the fact that the product's original is from 'the occupied Palestinian territories' crosses a red line. We will use all the diplomatic resources to make it very clear that as far as Israel is concerned, there is no difference between a product from Ariel and the Golan and a product from Haifa and Ashdod.

"Labeling products means a boycott of Israel and not only of the settlements," continued Hotovely. "It leaves a particularly bad taste that Europe is applying labels that remind us of dark days."