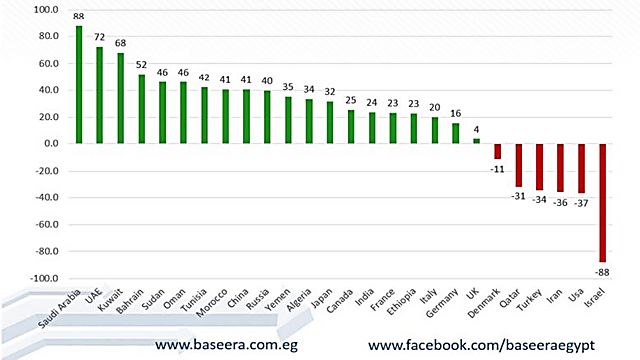 The Egyptian Center for Public Opinion Research reveals US is second most hostile country, Iran third; Saudi Arabia ranks as most friendly followed by Gulf States.

A public opinion survey of Egyptians published Tuesday placed Israel in first place in the category of hostile nations - frienemies at best.  The Egyptian Center for Public Opinion Research (Baseera), published the results of the survey in media outlets associated with the regime, like Al-Ahram's website and the news agency al-Sharq al-Awsat.

The survey assigned countries a rating ranging from 100 to -100, with the negative figures indicating hostility and the positive figures friendliness. Israel received -88 points in the survey, and is thus considered by Egyptians to be its most hostile nation.

Egyptians' perception regarding friendly (in green) and hostile (in red) countries (Photo: Baseera)
The United States followed by quite a large margin with -37 points, then Iran with -36 points. Turkey received -34 points and Qatar -31. Denmark is in sixth place with -11 points.

Despite the apparent wariness among his citizens, Egyptian President Abdel-Fattah al-Sisi said in a recent interview that it was necessary to extend the peace treaty between Israel and Egypt to other Arab countries. "I am optimistic by nature, and I think there's a great opportunity."

The Gulf states known as being close to Egypt and to the al-Sisi regime ranked high in the survey with the United Arab Emirates coming in second, Kuwait third and Bahrain fourth.

China's ranking as ninth most friendly country raised interest as it is the non-Arab and non-Western country that received the highest score. Russia ranks right behind China with its cooperation with Egypt increasing steadily of late. Regarding Western countries, there was a shift in attitude towards the United Kingdom, which in previous surveys was considered to be a hostile country but in this survey entered the group of friendly countries.

1,551 Egyptian citizens, aged 18 or older, participated in the telephone survey at the end of May. Participation response rate was around 48 percent and the margin of error is less than 3 percent.