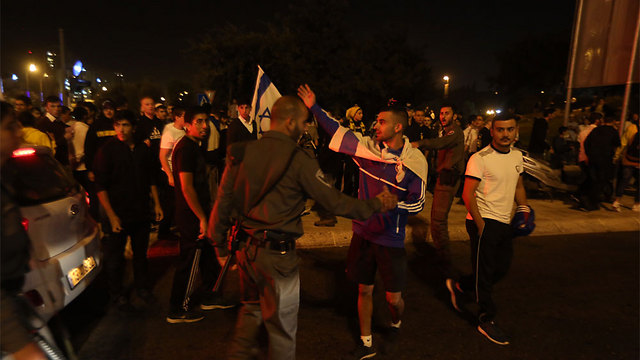 Hundreds of extremists march in Jerusalem, asking passersby if they were Arab; head of Lehava group arrested.

Hundreds of members of La Familia, the radical Beitar Jerusalem fan club, and right-wing extremist group Lehava convened on Thursday evening in Jerusalem with the intention of marching to the Western Wall in protest of terror attacks in Israel.

Protesters clashed with police, which prevented them from marching. At least four people were arrested, including Ben-Zion Gopstein, the head of Lehava. One arrestee was found to be carrying a knife. Protesters threw stones at police and border guards, and the district police commander ultimately decided to allow them to reach the Western Wall.

They chanted "death to Arabs" and some aggressively asked passersby if they were Arab, and left them alone if they said no.

Police said they intended to bring in additional security at Jaffa Gate to prevent the demonstrators from entering the Old City. 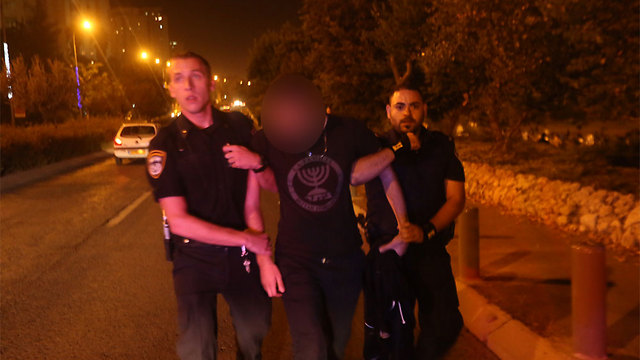 The club has been penalized numerous times for the behavior of its fans, which has included booing during a moment of silence for slain Prime Minister Yitzhak Rabin, singing songs deriding the Prophet Muhammad and physically assaulting Arab maintenance workers in stadiums.

The Lehava organization opposes Jewish assimilation, especially interfaith marriages between Jews and non-Jews. It has run afoul of the law numerous times, and Gopstein was arrested in December before being released.