Obama. As far as he is concerned, Jerusalem can wait
Photo: EPA 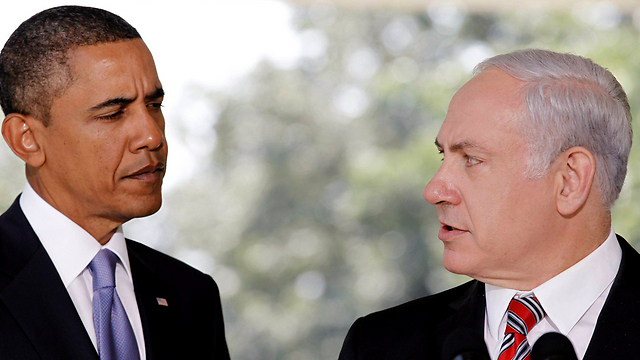 When Obama turned his back on Jerusalem

Op-ed: The American president had the ability to put irresistible pressure on Israel and the Palestinians and drag their leaders towards the only way which could stop the circle of violence: A peace agreement. He chose not to do that.

WASHINGTON - US President Barack Obama had many good intentions and plans to make peace between Israel and the Palestinians. Now, when the chance for peace is buried under stones, knives and Molotov cocktails, he can't say to himself and to the world that he had no part in this failure. He is one of its precursors.

Obama discovered Prime Minister Benjamin Netanyahu's refusal of a two-state agreement before starting his second term. As opposed to general opinion, the lack of communication between the two did not begin when Netanyahu arrived to address the US Congress against the agreement with Iran behind the president's back. It happened way before that, when Obama realized that Netanyahu talks about peace but has no intention of doing what it takes to reach peace.

Obama warned, sent messengers and presented plans. There is one thing he didn’t do: He didn’t put real pressure on the two sides. The leader of the free world has the power to create a situation in which two nations, which more or less depend on the White House's purse, have a lot to lose if they don’t conform to Washington's peace vision, which is aimed at establishing a decent agreement. But Obama avoided forcing an agreement on Israel and the Palestinians, although his closest circle told him it was the only way out.

The American president had the ability to put irresistible pressure on the two sides and drag their leaders towards the only way which could bring peace and calm to the region and stop the circle of violence: A peace agreement. He chose not to do that.

Obama and Netanyahu. Obama distanced himself from this cursed neighborhood in the Middle East, and the next president will do the same (Photo: Reuters)

It doesn’t take a particularly creative mind to reach such an agreement. The characteristics are clear to all those involved, including the Israeli prime minister. He also knows that there is only one solution, based on components from the Bill Clinton parameters and the Saudi peace initiative: Two states, marking borders and land swaps, Jerusalem as the capital of both states, an acceptable solution to the refugee issue, an end to the occupation and mutual recognition.

The bloodbath which is taking place now could have been avoided, and so could the one before it and the one which will unfortunately follow. That requires a strong leadership whose doctrine isn't based on fears and prejudice. Netanyahu and Palestinian President Mahmoud Abbas have so far been unwilling to accept the tough decisions and present to the world a peace of the brave. On the other hand, Obama has failed to apply the world power's authority and has been unprepared to discuss the punishment which would follow the two sides' sins.

Obama very much wanted to reach a significant achievement in the foreign policy arena before leaving the White House. He put his name on a historic agreement with Iran and received credit for establishing diplomatic relations with Cuba after decades of unnecessary hostility. He justified the Nobel Prize he received as a down payment in his first year in office through Tehran and Havana. As far as he is concerned, Jerusalem can wait.

The opportunity to reach a peace agreement during his term was missed by all those involved: It was a story of insistence, inflexibility, fear and preferring political survival and the throne of power over giving peace a chance. The result is grim: The Palestinians are left with no hope and Israel has become unsafe, isolated in the world like it has never been before. Obama distanced himself from this cursed neighborhood in the Middle East, and the next president will do the same.

In the Democratic presidential debate on Tuesday, Israel was not even mentioned, and that’s where the wind is blowing: The White House is turning its back. It is conveying indifference. Netanyahu will arrive at the White House next month. It will be Obama's last opportunity to exert his power both on Israel and on the Palestinians so that they start talking instead of killing. It's hard to believe he will take this route. His agenda has already changed. So has his list of priorities.