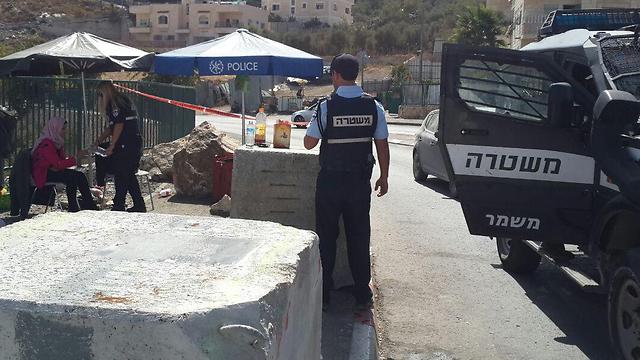 A capital divided: Will East Jerusalem be closed off?

Jewish locals, IDF officers question efficacy of blockade on East Jerusalem despite recent attacks; 'We are fighting for the unity of Jerusalem.'

The Jerusalem District Police is trying to get used to a new reality in which police officers and Border Policemen are required to disrupt or stop the movement of Israeli Arabs from East Jerusalem to its western part. Unlike security forces in the West Bank, who are accustomed to closures or a partial closures, troops in the capital have so far been operating without having to imprison the 370,000 Arab residents of East Jerusalem in their neighborhoods. The Security Cabinet has examined the possibility of imposing a closure or a partial closure in East Jerusalem, but it is doubtful such moves will be implemented because it would mean limiting the freedom of movement of Israeli citizens, like the Arab residents of Jaffa or Sakhnin, rather than Palestinians from Ramallah or Hebron.

Checkpoint in East Jerusalem (Photo: Elior Levy)
What the Jerusalem Police is doing right now is neither a closure, but rather a partial and strictly local spread of checkpoints in certain areas of East Jerusalem, like in Jabel Mukaber, where residents have to undergo security checks before being allowed to travel to the western part of the city. Full closure is only implemented in a handful of spots in East Jerusalem, meaning a potential terrorist could easily bypass police checkpoints on their way to commit an attack in the city center. Nonetheless, the efficacy of such a move could turn into deterrence on the Arab street. Images of counterterrorism and Border Police officers checking the vehicles and belongings of Arabs in East Jerusalem could make any future attacker think twice before leaving their home to commit an attack. At the same time, such a move could help strengthen the sense of security among the Jewish public.

'A key element in restraining the street'

In an interview with Ynet, a senior officer in the Judea and Samaria Division explained the IDF's policy, which is to continue allowing freedom of movement for Palestinians in the territories and not imposing a closure on the West Bank.

He asserted that the "restriction of movement must be examined carefully and according to operational needs, not as collective punishment on the population. Retaining the fabric of Palestinian life is a key element in curbing activity on the Palstinian street, so that the masses will not get involved in the clashes."

Another officer from the Central Command explained the benefits of not imposing closures, even in times of escalation: "Once you close a street or roadway for Palestinians and let Jews move freely, you make life easier for the terrorist, who knows that every car or person going by is Jewish, and there will therefore be no mistakes in identification. Even when there are closures, terrorists will find a way to reach and attack Jews."

Israel would rather avoid closures or even partial closures because Palestinians stuck at home, who are not allowed to reach their workplaces or educational institutions, will, at best, join the rioting, and in the worst case, want to take revenge by committing an attack.

"When intelligence can't provide information on these terrorists in advance, then you have no choice but to take a step such as setting up a closure, which is a collective action. It's not the best situation, in which you limit the movement of an entire neighborhood due to three or five terrorists that come from there," said Maj. Gen. (res.) Gabi Ofir, the former commander of the Judea and Samaria Division.

"These knife attacks are on a scale we haven't had to cope with in the past, although in the past there were more horrific attacks. Isolating the area is the right thing to do at this point, in small areas, even if there is an economic price to pay for it, and only for a short period of time. This is a step that must be taken to save lives until this trend is stopped."

The last time closures were placed on West Bank cities and on the West Bank as a whole was during the days of the second intifada, when tanks were seen on the hilltops around Hebron and Bethlehem enforcing government policy against the terror attacks, which were in full force at the time. Today, the only restriction remaining on Palestinians is entry into Israel, but the defense establishment gives permits to tens of thousands of Palestinians to work inside the country, and even to visit anywhere in Israel during Muslim holidays.

There are 120,000 Palestinians who make their living inside Israel: 60,000 leave the West Bank every morning to work beyond the Green Line, 20,000 are merchants, and the rest work in Jewish settlements in the West Bank, in industrial areas or in construction. Tens of thousands support their families by crossing illegally into Israel, and only a tiny fraction of them have taken advantage of this to carry out attacks deep inside the country during the past two years.

According to the IDF, not a single Palestinian from the 120,000 who have permits to work in Israel and received the Shin Bet's stamp of approval has taken advantage of this to carry out an attack. So imposing a closure and the resulting damage done to 700,000-800,000 Palestinians would be a bad move to take for Israel.

Closures have become a less reliable tool, and even during major Jewish holidays over the past two years, those holding Israeli work permits were allowed into Israel. Even when the army imposes a closure for operational purposes, such as after the escape of terrorists from the scenes of serious attacks, it does so in a proportionate and levelheaded way.

After the attack near Itamar, for example, in which the Henkin couple were murdered, soldiers imposed a closure on the southern part of Nablus for only a few hours. After the kidnapping of the three Israeli teens in Gush Etzion last year, the Judea and Samaria Division placed a partial closure on Hebron - soldiers deployed intermittent roadblocks at the entrances and exits from the city, but permitted Palestinians to pass after checking their vehicles.

Meanwhile, the IDF started moving combat battalions from the Southern and Northern Command to the Central Command, as well as observation balloons and 'Skylark' tactical drones. In addition, hundreds of IDF soldiers, including soldiers in training camp, were stationed in police districts in order to aid in the protection of heavily populated areas. The soldiers will be armed and will work under police orders.

In addition, the IDF has formulated a plan that is due to be approved and budgeted in the coming days to construct a new fence along 62 km of the border with the Gaza Strip. This is in the wake of hundred of meters of the border fence being breached by Gazan protesters in recent days. The new fence will be built similarly to the fence erected on the Sinai border.

Finance Minister Moshe Kahlon told a ministerial panel, in relation to demolishing the houses of families of terrorists, that "anyone who is compassionate to the cruel will end up behaving cruelly to the merciful. We must deliver a deadly financial blow to terrorists and their families. Every terrorist must know before he attacks a Jew that his own family will be harmed. A deterrent must be established against terrorists in the economic domain as well."

Jews of East Jerusalem not surprised by wave of terror

"If a 20-second commercial can sell a drink, then think what a few years of incitement can do to a child," a Jewish resident of East Jerusalem said Wednesday to convey his lack of surprise at the recent wave of terror in the city and the rest of the country. Neither was he, as well as others there, taken aback by the individual nature of their actions and their young age.

However, many of them criticize the government's response. "Encircling the east of the city means the division of the city - and we opposed to this," they said.

In Nof Zion, a neighborhood located right in the middle of the Palestinian neighborhood of Jabel Mukaber, 50 families live in several new buildings, mostly as tenants. "The contractor built here because of the unique view and thought of marketing to foreigners, but we are the ones who ended up here," said Michal Tsemach, who lives in the neighborhood with her husband and children.

Police and army forces are stationed on the road leading up to the neighborhood, as well as at the entry and exit points of the village. Some exits were hermetically sealed and in another point entry and exit is possible after security checks.

Recent events did not surprise the Jewish residents of the area, but neither did it increase the level of friction between Jews and Palestinians. "You have to understand that we live here with a constant high level of friction, so we are trained and there is no increase in that level," Tsemach explained. "The gate to the parking area has to be opened several meters before getting there so as to not accidentally remain stationary in the middle of the neighborhood, for example. I know my kids these days can no longer invite friends over as the situation is very tense," she added.

Yishai Fleischer and his daughter in Ma'ale Zetim 'fighting for the unity of Jerusalem' (Photo: Amit Shavi)

Rabbi Yonathan Elran, also a resident of the neighborhood, said that it was only a matter of time until violence erupted. "Every night I go to bed and I hear sermons on the loudspeakers: 'Yahood (Jews), Allah, Israel, Netanyahu '... these are words that are not said in a weekly sermon but rather in a timed and planned incitement speech, and also in kindergartens, and on social network sites. The children here are going through a steamroller of propaganda. We have been hearing gunshots here for years, but nobody comes here," explained Rabbi Elran.

Ma'ale Hazeitim is another Jewish neighborhood in East Jerusalem, which is adjacent to the Palestinian neighborhood of Ras al Amud. The entrance to the neighborhood is completely secured and access is granted to residents only. Recently, the neighborhood has suffered dozens of Molotov cocktail attacks and stones have been thrown at the houses.

"We are set up for this level of tension, that's why the terror in Jerusalem does not seem threatening to us," said resident Yishai Fleisher. "The majority of residents here are armed and there are security checks."

Fleischer explained why he is actually against the closure of the Arab neighborhoods in the area. "We are here because we are fighting for the unity of Jerusalem. This is of the highest value and one must not refer to Jerusalem as a divided city. But if you set up closures or encirclements, this is in fact dividing up the city."