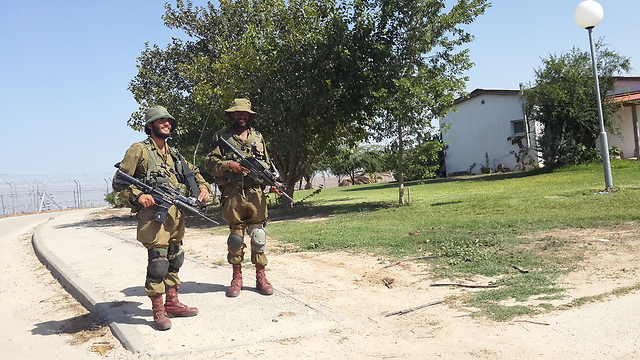 In preparation for Hamas’s declared 'day of rage,' IDF sends infantry companies to the Gaza border despite assessment that direct fighting with Hamas is not on the horizon.

In preparation for possible violence on Friday, due to Hamas’s proclamation of a “day of rage,” IDF troops were deployed this week to patrol and protect several Israeli towns bordering the Gaza Strip.

The heightened security in border communities comes despite the military’s assessment that the recent wave of attacks and the tensions in Jerusalem won’t lead to another round of fighting with Hamas.

According to a security official in one of the towns, the deployed companies, from the Golani and Paratrooper Brigades, are preparing for an extreme scenario, in which protesters from Gaza manage to get inside Israel.

The forces began arriving in the area on Wednesday, establishing assembly areas at a number of points along the border. Some of the soldiers were sent on patrol duties in the towns themselves. As of Thursday afternoon, the soldiers were only deployed in three towns: Netiv HaAsara, Nahal Oz, and Kerem Shalom.

Since last week, violent protests have been recorded at different points along the border – mostly in northern Gaza and its center – in solidarity with Arab protesters in Jerusalem and the West Bank.

Recording of what locals claim is Hamas digging tunnels beneath their feet.

Thousands of Palestinians rioted at the border and in some cases managed to break through the fence and enter Israel. During the first two days of conflicts – Friday and Saturday – nine Palestinians were killed by IDF fire.

In the past few days protester numbers have shrunk to just a few dozen, but the IDF is preparing for the possibility that they will increase again, as has happened on Fridays past. The IDF said, however, that the situation is under control.

“We are prepared and feel the change following the situation in Israel,” said a security official from one of the border towns. “Right now it seems that it’s just a few protesters, who mostly don’t have firearms. It’s true that the situation is tense and there’s a military presence, but as far as the towns are concerned there are no special instructions. We’re monitoring (the situation).”

In the past few days, residents of Gaza-border towns have complained about hearing tunneling noises. Some of them have recorded the noises, which sound like knocks, and sent the recordings to the IDF. They say that military experts came to the areas and conducted tests, discovering nothing.