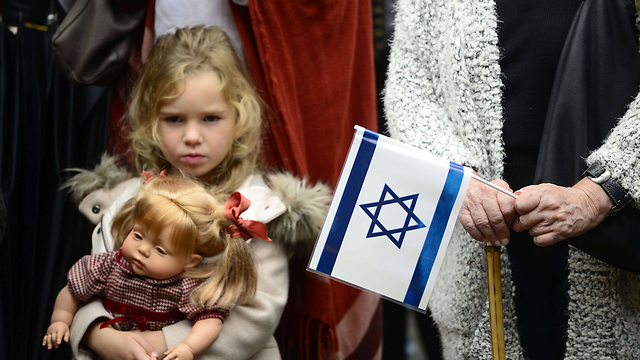 Thousands rally for Israel in Paris, Rome and Madrid

Spanish demonstrators hold up signs declaring 'Yo estoy con Israel' - I am with Israel; 4,000 demonstrate in front of Israeli embassy in Paris.

Thousands of people demonstrated in Rome, Paris and Madrid on Sunday in solidarity with Israel, as the Jewish state experiences weeks of escalating violence and daily terror attacks.

Hundreds of demonstrators, among them politicians and noted Italian societal figures, stood outside the Israeli Embassy in Rome to show their support of Israel. The protesters filled adjacent streets with Israeli flags.

A similar show of support came from Madrid, where the Jewish community brought over 300 people to stand by Israel. The demonstrators carried signs that said “Yo estoy con Israel” – I am with Israel.

Supporters in Madrid (Photo: AFP)
Participants in the demonstrations said it was especially important to them to pass along a message of support for Israel in these difficult times.

In Rome, Fabrizio Chiquito, the chairman of the Italian Parliament's Foreign Relations Committee, said that it is a moral duty to stand by Israel.

Israel’s Ambassador to Italy, Naor Gilon, said that “The Palestinians have made an art form of turning the aggressor into a victim. Unfortunately, there are those in the international media who cooperate with them.”

The demonstrations in Madrid and Rome were broadcasted live, with messages passed between them.

The head of the Madrid Jewish community, David Hatchwell, said the demonstration was in support of Israel, its security forces, and the victims of terrorism.

"Israel has a right to exist. When we do not recognize the right of a country to defend itself against attacks with a knife, gun, and cars being rammed into people, it is the same as not recognizing its legitimacy," said Sacha Reingewirtz, the President of UEJF, standing at a podium adorned with a banner "French and Israelis united against terrorism."

"I love Israel and I want to be able to say that without being treated as a criminal occupier, a murderer," he said.

Demonstrators waved Israeli flags, as well as flags of the Beitar movement and of the Jewish Defense League.

Israel's ambassador to France, Aliza Bin Nun, called on the international community "not to draw a false comparison between Israeli citizens and those who stab them to death."

"Israel can not be compared to the Palestinians who have taken the initiative to deteriorate the situation," she added.

The president of the Representative Council of French Jewish Institutions (CRIF), Roger Cukierman, said blame for the attacks was on Palestinian teachers, parents and leadership for teaching their children hatred of Jews "because children are not born anti-Semites," and noting that "social networks have become a training ground for jihad."

Menachem Gantz, Itamar Eichner and AFP contributed to this story.