PM Netanyahu in one of the videos. 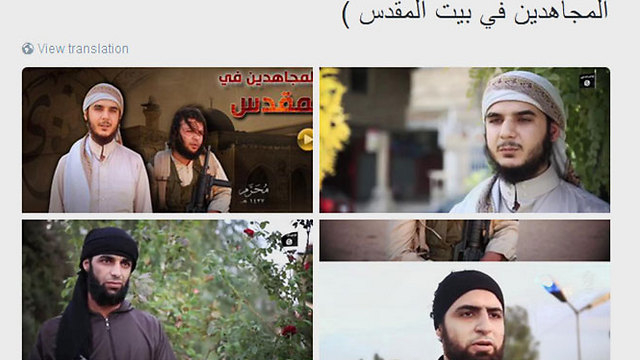 'Turn them into rotten corpses'

The Islamic State released several videos on Sunday praising the recent wave of attacks against Israelis – the first time the organization has publicly referenced the present escalation. Some of the videos were uploaded to social media sites with the hashtag "#Beheadthejew."
The video
X

The first video, which originated in Iraq's Nineveh Governorate, claims that Al-Aqsa Mosque in Jerusalem "was conquered by the lowest of people – the Jews," who "sowed destruction in it." The propaganda video also maintains that the Jews "murder the Palestinians, arrest them, torture them, and violate their honor while broadcasting misleading videos."

The video's narrator explains, "While all of this is happening, the knives and daggers were taken out so that they will be sated by the blood (of the Jews). A response for a response and an eye for an eye. That is the way of the descendants of Saladin – a jihad for Allah. The ground under the Jews' feet will become a volcano. Their blood will flow and their body parts will be scattered."

ISIS members in the different videos.

Afterward, interviews of sorts with the residents of the "Islamic State" were broadcast, in which they congratulate Palestinians for the current wave of terror attacks. "My message to the jihad warriors in Jerusalem – I congratulate you for the jihad against the exploiting Jews," said one of them. "We recommend that you prepare yourselves materially and morally, so that you can terrorize the Jews," he added, with Israeli Prime Minister Benjamin Netanyahu's photo on screen.

Later in the video, the same man said, "Frighten them with car-bombs…turn them into rotten corpses and scattered body parts." He later threatened, "Know that the soldiers of Islam are fighting here in Iraq, Syria, in Khorasan, the Caucasus, and in West Africa, but their eyes are pointed at Jerusalem and they will enter it with Allah's help."

PM Netanyahu in one of the videos.
Another interviewee implored the Palestinians to not trust either Hamas of Fatah, "They were made in order to rip you apart and divide you. There is no difference between Fatah and Hamas. Each acts only towards its own interests. Some of them are collaborators of the Crusaders (the West) and others are collaborators of the (Iranians)." He also called for them not to wait for Arab nation leaders or, "The tyrants, who have traded in the Palestinian matters and turned them into a tool for achieving their own interests."

Another video, broadcast Sunday, has the title "The promise is nearing," and a photo of the Al-Aqsa mosque. An ISIS man called Abu Nur al-Ansari speaks in the video, claiming that "Islamic State" soldiers fighting in Syria and Iraq are flowing to Palestine. "Your time is coming, Jewish group," he says.

The fourth propaganda video came from Deir ez-Zor in east Syria and had the same message, "Bring fear back to the Jews." An ISIS man speaks to the Palestinians, saying, "What are you waiting for? For those organizations (Hamas and others) to open their (weapons) caches to you? Be Lone wolves who attack Allah's enemies. Carry what you can as far as weapons go and murder them where you find them."

The video starts with Images of IDF soldiers crying at funerals, and ends with the following sentence appearing on screen and being narrated, "Bring the fear back to the Jews by explosion, arson, and stabbing." The execution of the East Jerusalem resident who was accused by ISIS of spying for the Mossad is also featured in the video.