Few of us give further thought to this ancient practice
Photo: Shutterstock 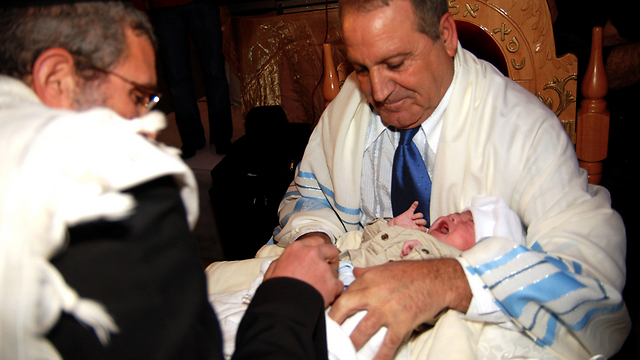 'No circumcision for my son – it's not moral'

Rani Kasher decided not to circumcise his third son after conducting research; he is now an anti-circumcision activist and plans on writing a book on it.

Why do we circumcise our baby boys?

Most of us automatically answer it because that's the custom, that it is a mitzvah, to honor the family, or because it's healthy. Few of us give further thought to the ancient practice.

Rani Kasher, 54, a father of six children between the ages of 11 and 23, a coordinator of a cultural center in Kfar Giladi, a lecturer on nature and owner of a printing house, undertook the mission of bringing to the public's attention the true meaning of the act of cutting the foreskin.

"When my older children were born, I invited a mohel (person who is trained in giving circumcisions) without thinking about it at all. The possibility of not circumcising never even crossed my mind," he says. "When my wife was pregnant with our third son seventeen years ago, I read an American magazine article in which a doctor described in detail why there is no medical justification to perform a circumcision. As soon as I finished reading the article I said to myself, and later to my wife, if it's a boy – there will be no circumcision."

The ritual of circumcision (Photo: Shutterstock)

How did your wife take it?

"She said 'okay, we'll see'. She was not really ready for it. It also took me a long time to internalize the decision, because it was unconventional. I began to delve into the subject, commissioned articles from abroad and put a lot of thought into it. A year later, I began to publish a newsletter called 'No Circumcision - Second Thoughts About Circumcision.' I felt I was not conscious when my older boys were born and I was very upset that I had had them circumcised. I wanted to spare other parents from that.

"To perform a circumcision, one has to make a decision," points out Kasher. "The problem of many parents, like in the case of my first two sons, is that they do not decide. On the one hand, this is an extremely difficult process, but on the other hand we do it casually. I want to change things and make people ask questions and make a decision. I am currently in the process of recruiting Headstart supporters with the intent of writing a book to raise awareness about the issue."

Although it is generally believed that circumcision contributes to a child's health, Kosher denies this claim altogether.

"Clinical studies do not support that. Only in the United States can one find research supporting it," he says. "There is an incredible bias in favor of circumcision in the US, because it impairs sexuality."

Still, doctors across the board in Israel recommend circumcision.

"The scandal is that when it comes to circumcision, doctors mix religion with medicine. I, as a secularist, cannot get an objective medical opinion. People are losing their medical integrity here. Today there are only three countries in the world in which circumcision is practiced as a matter of course: the USA, South Korea and Israel. All advanced Western countries do not perform circumcision. How can it be that an Israeli or American doctor gives a different recommendation from a French, Swedish or Japanese doctor?

"The mere implementation of this procedure contravenes so many medical principles, the first of which is - do no harm. How a doctor cut the organ of a healthy baby? Until now doctors believe that this is not a functioning organ."

While researching the issue of circumcision, Kasher discovered that only in recent decades has the foreskin been researched. "Today there is research, and we know that it's important. During infancy, the foreskin protects the baby against various diseases, and it has an important role in a man's sex lives. The foreskin's nerves respond to a gentle touch, and when it is removed we are left only the sense of a rough touch.

"There are a lot of men who had too much skin removed, and they suffer from painful erections without knowing that it is a problem. It is amazing to me that we have to even check to see if removal of the foreskin affects a person's functioning. It is like removing a thumb and then doing research to see if it is right. It's inconceivable."

A lot of circumcised men are will tell you that their sex life is fine, thank you very much.

One of the arguments most often brought up in favor of circumcision is that as it is the Israeli consensus, a child that is not circumcised will be anomalous and therefore suffer from harassment during his life.

"Even 17 years ago, when they told me I was taking a decision that would put psychological and social pressures on my child, I replied that if I raise a child to have self-confidence and self-worth, nobody will laugh at him," replies Kosher emphatically.

And what about when they grow up – will it not be a problem for Jewish women?

"There are young people who tell their partners in advance that they are not circumcised. I suppose that if a woman tells a man that since he is not circumcised she does not want to go out with him, then she should not go out with him. I'm sure that an adolescent already understands the meaning of the foreskin and understand that it is a good thing, and if he feels that it is a burden on him, then he can go and have it removed under anesthesia. But it will be his decision."

Let's talk a moment about the relationship to Judaism. Circumcision is a religious custom, and some people fear that if their child is not circumcised he will not be a Jew.

"It's a myth that I want to smash. A Jew is a person born to a Jewish mother. Often it's insulting to me that people think that my identity – Jewish, Israeli – is linked to the shape of my penis."

What would you advise parents who have decided not to circumcise their child, but their family is giving them a really hard time?

"This is a very difficult situation, and I'm not sure that in order not to circumcise one should sever ties with the family. On the other hand, in many cases, the family gets scared at first, and then accepts it. One can announce it gently and gradually: at first say you are waiting a bit, and after a month or two, the pressure drops and it's a lot easier. A lot of people in our generation perform circumcision because of family pressure, but this won't be the case for the next generation. I think it should be the last consideration."

Kasher explains that his motivation to address the issue is due to a lack of awareness in the country: "I once read that someone had called me a social activist. I guess I'm a social activist. The book comes to fill a gap that was completely empty, or full of lies and myths and things that are hidden from us. For example, how many accidents and damage result from circumcision? This is a hidden statistic.

"I decided to gather the information, and raise awareness. My aim is to thoroughly deal with the issue and tell parents – this is the information, now you know, now you decide. And I hope that in fifty years it will not be their decision,"