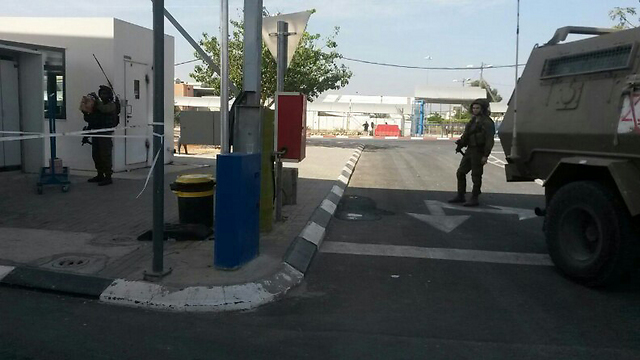 A 16-year-old attempted to stab guards at a checkpoint while pretending to be a candy salesman, while a man in Jerusalem reported being attacked with a knife, and a woman was arrested near Kedumim with a knife in her possession.

A 16-year-old Palestinian attacker attempted to stab security guards at a checkpoint near Jenin in the West Bank Saturday morning as US Secretary of State John Kerry arrived in Jordan to discuss finding a path to restore calm in East Jerusalem and the West Bank. Muhammad Zakarnah, the Palestinian attacker, was reported masquerading as a Krembo (a type of Israeli candy: A biscut topped with whipped cream, covered in chocolate) salesman before ditching his wares and charging at the guards with a knife in his hand in between waiting vehicles. The guard who stood before the attacker saw the knife, pulled his gun, and fired on the Palestinian, killing him on the scene.

Big.-Gen. (ret.) Kamil Abu Rokun, head of the Crossing Authority in the Ministry of Defense, praised the performance of security personnel, and specifically the guard's swift response to the attacker, "We've drilled this situation and those like it several times recently, due to the intensifying security situation.

Security personnel acted just as we expected of them. The Gilboa crossing is mainly used on weekends, allowing thousands of Israeli vehicles to enter Jenin for trade purposes. This attempted terrorist attack hurts the Palestinians and the Palestinian economy first and foremost.

The crossing where the attack occurred is operated by Defense Ministry guards, and next to it is a crossing occasionally staffed by IDF soldiers. This is the first time in the current terror wave that terrorists attempt to attack guards who are stationed at West Bank crossings. The Gilboa crossing, which is the northernmost entrance to Jenin and the northern West Bank was closed after the attempted attack.

On Saturday, reports emerged of a foiled stabbing attack in Jerusalem. A Jewish man approached a number of police officers on Shivtei Israel Street, claiming that an arab man tried to stab him. The man said he fought his attempted stabber, who dropped the knife and escaped. The man gave the officers the knife. Police then began searching for the suspected attacker.

On Sunday evening, a Palestinian woman was arrested near the settlementof Kedumim, when a knife was found in her bag.