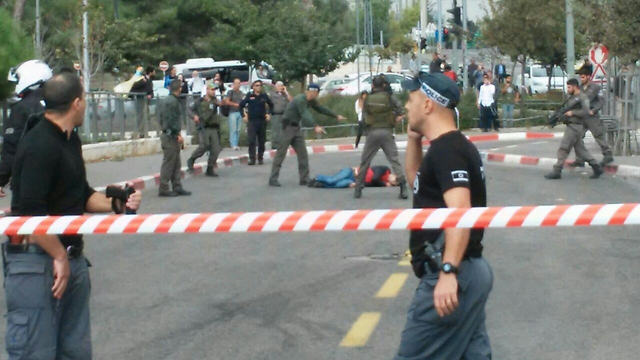 Knife attack near Ammunition Hill ends in terrorist being neutralized; two terrorists neutralized as they attempt to stab troops at Tapuah Junction.

Terror returned to Jerusalem on Friday after nearly two weeks of relative calm. An Israeli was stabbed and moderately wounded at around 1:15pm near Ammunition Hill in Jerusalem.

The terrorist was shot and neutralized. A second Israeli was wounded by gunfire when police and security guards shot at the attacker.

Police later decided to remove concrete blocs which had closed off the entrance to the neighborhood of Issawiya, after residents and leaders from the neighborhood pledged to maintain the quiet that has been felt in recent days. The barriers were laid in place, de-facto closing off the main entrance to Issawyia, after a series of attacks in the capital. The decision had been made following a cabinet meeting which revolved around a possible blockade of Jerusalem's eastern neighborhoods.

Scene of the Jerusalem attack

The barriers were replaced by a "breathing checkpoint," which will allow villagers to come and go under the scrutiny of security forces.

It was the first terror attack in Jerusalem since October 17, which was preceded by weeks of frequent attacks.

Around an hour earlier, two terrorists attempted to stab border guards at Tapuah Junction in the West Bank. The pair arrived on moped and both held knives. A soldier shot and neutralized them. It was the first time during the ongoing wave of terror that attackers had used motor scooters.

In a third incident, a Palestinian participating in rioting in Beit El attempted to stab a soldier and fled. Security forces followed in pursuit, during which a Jeep was hit with two firebombs, and continued to chase the assailant, eventually neutralizing the man by hitting him with the vehicle.

Jeep hitting the Palestinian who tried to stab a soldierf
X

Jeep hitting the Palestinian who tried to stab a soldierf

Later on Friday afternoon, 200 Palestinians took part in violent clashes with security forces in the village of Al Bira, near Ramallah. Security forces reported receiving live fire from within the crowd of rioters, however no injuries were reported. Security forces then returned fire with rubber bullets, wounding a number of Palestinian rioters, while continuing to keep the protest at bay with crowd control measures.

Clashes had also taken place on the border fence with Gaza, where Palestinian medical sources had reported that 26 rioters were injured by live and rubber bullet fire.