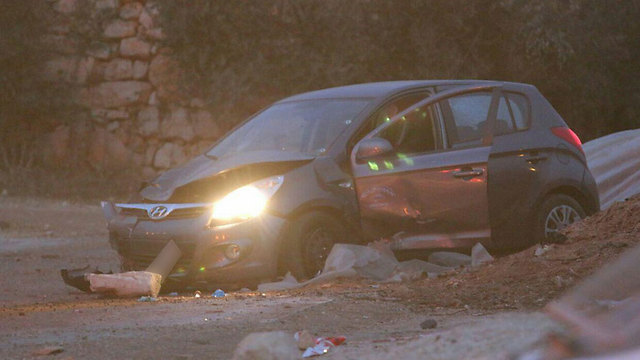 Zigzagging, the government has returned the body of the terrorist from Hebron who ran over and critically wounded a Border Police officer; mass funeral is expected on Thursday; Palestinian Authority representative at the UN claims bodies have been returned with organs missing.

Israel returned the body of Ibrahim Saqafi to the Palestinians on Wednesday evening. Saqafi, a Hebron resident, had carried out a vehicular attack near Halhul earlier on Wednesday that left a Border Police officer critically wounded.

The return of Saqafi's body came in spite of Israel's earlier decision to delay returning terrorists' bodies to the Palestinians.

Meanwhile, the Palestinian Authority representative at the United Nations claimed that other bodies which had been transferred to them "were returned with organs missing, after the occupying forces harvested organs from the Palestinian victims."

Saqafi's body was handed over to the Palestinians at Tarqumia checkpoint and from there taken to Hebron. The funeral it to place on Thursday afternoon, also contradicting Israel's stipulation that it would only return terrorists' bodies on the condition that the Palestinians do not organize mass funerals for them.

The decision not to return bodies was taken after the government was criticized by the Israeli public for giving back the bodies of terrorists that had committed attacks during the current wave of violence. Mass funerals were held for the terrorists and an official ceremony was held for them at the Hebron Muqataa.

Because of Palestinian intransigence regarding the condition placed by Israel, Israel suspended the return of five terrorists' bodies to their families in Hebron. But Israeli officials decided to return the body of the terrorist who committed the car attack on Wednesday, even though he was not a resident of Hebron and although his funeral is to take place during the day. A Border Police officer was critically wounded in the car attack.

Hebron has in the last two weeks been the site of a major public campaign urging the return of all bodies of terrorists who lived in Hebron that are in Israeli hands. The highest number of terrorists from the West Bank in the latest escalation comes from the Hebron area. The campaign is enhanced by demonstrations held every few days, which quickly escalate into clashes with security forces.

Defense Minister Moshe Ya'alon said at the Knesset on Wednesday that holding the bodies does not deter potential terrorists, "in contrast to house demolitions or revoking residency, for which we have proof that they are deterrent measures."

Ya'alon explained that the question was being decided on a case-by-case basis. Bodies are to be returned, he said, as long as a quiet, modest funeral is ensured. "The policy is consistent and reasoned in accordance with ethical and security considerations," added Ya'alon.

Palestinian Permanent Observer to the UN Riyad Mansour submitted a formal complaint against Israel on Wednesday, alleging that it had returned terrorists' bodies with organs missing.

"A medical examination conducted on bodies of Palestinians returned after they were killed by the occupying power found that they were missing organs," Mansour claimed in the letter.

Israeli Ambassador to the UN Danny Danon wrote a letter in response to the UN Secretary General, stating that "the Palestinian representative's anti-Semitic face has been revealed" and that the allegation was "blood libel". Danon urged the UN to sharply condemn "the Palestinian representative's inflammatory statements and remove anti-Semitism from the hallways of the United Nations."

Border Police reservists to be released

The terrorist attack in Hebron came after a quiet day, and security officials have said they believe the terrorism wave is abating. In addition to removing some checkpoints inside Jerusalem this week, a reduction in the amount of soldiers in Jerusalem neighborhoods has begun.