Hitler in 'Look Who's Back' 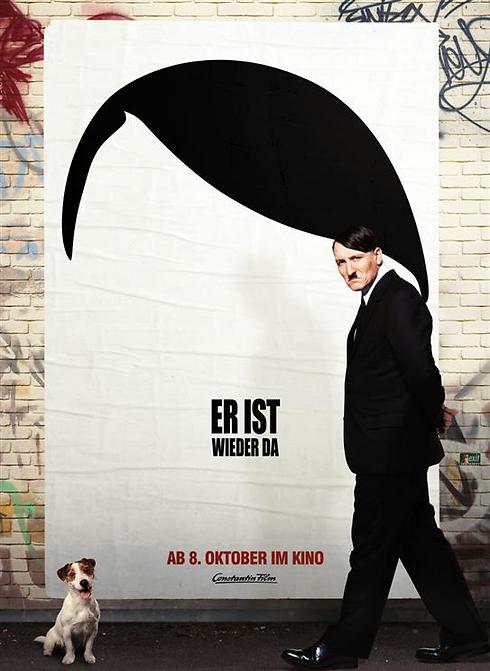 'Look Who's Back,' released in early October, in which the Führer awakes in modern-day Germany, is a phenomenal success in the motherland.

BERLIN - The new German comedy "Look Who's Back" presents Hitler as an archaic and ridiculous figure, forcing Germans to rethink their attitude to Hitler and his repressed legacy - and it's a big hit.  The film, directed by David Wnendt, is based on the provocative bestselling novel by Timur Vermes published in 2012 which describes an imaginary situation in which Hitler returns from the dead straight into the 21st century and tries to acclimate to the new Germany.
Look Who's Back
X

The same questions that arose when the 2004 German film Downfall, which depicted Hitler's final 10 days, came out are being asked again: Is it permissible to portray one of the most vicious murderers in human history as someone we can empathize with? Are we not running the risk of making his message acceptable?

“Germans should be able to laugh at Hitler, rather than viewing him as a monster, because that relieves him of responsibility for his deeds and diverts attention from his guilt for the Holocaust," Wnendt told the Guardian. “But it should be the type of laugh that catches in your throat and you’re almost ashamed when you realize what you’re doing.”

Hitler, played by actor Oliver Masucci, turns up in our world in 2014. He does not know that Germany was defeated and when he finds this out to his astonishment, he finds it hard to digest. He looks in amazement at the immigrants who, unlike him, have better acclimated to Berlin than him. Today's technology, particularly modern means of communication and the Internet, are science fiction for him.

Poster for 'Look Who's Back'

And it is precisely this technology that sends Hitler right into the center of public debate in Germany. Those who come across him first treat him as a clown, but one with lots of guts. They know that Hitler is dead, but his imitator seems quite reliable and determined, and therefore strange and amusing. Sawatzki, played by Fabian Busch, a journalist who was fired from a popular TV show, captures him accidentally on camera and decides to save his career with a story about an eccentric man who pretends to be Hitler in today's Germany. A sort of German Borat.

Hitler in 'Look Who's Back'

At this stage, Look Who's Back turns into a mockumentary comedy a la Sacha Baron Cohen, in which all kinds of people (allegedly not actors) are caught unawares and interact with Hitler. Responses were varied, with some even expressing a hope for his return. In context, it isn't entirely clear if this individuals are joking or if they are partially expressing a hidden desire that is not politically correct. Masucci claimed in interviews that these were authentic responses. It can be assumed that these were exaggerations in order to promote the film, but one can't deny that racism is rising to the surface once again amongst the German public, especially in extreme right-wing circles.

Durin the film, Hitler also becomes popular on a prime-time TV show. Viewers see it as a parody – after all he is only an imitator, not the Fuhrer himself. One can joke with him and give free reign to one's criticism of sanctimonious European liberalism and our racial passions. And so once again Adolf Hitler is sweeping away the masses. He gives fiery speeches and the crowd laughs and rollicks.

The sharp controversial humor of Look Who's Back is almost uninhibited, except for one point: the Jews. When the writing staff of Hitler's show are asked to provide offensive Holocaust jokes, they seem shocked - and so does the audience.

This is probably the reason why Hitler's open anti-Semitism is almost not at all present in the film and he rarely talks about his feelings toward the Jews. When he mentions the subject, the comedy stops and shock breaks out.

The film's success reconfirms the experiment for which the film was initially created: While Hitler himself is a cursed personality whose image triggers an allergic reaction amongst the majority of Germans (and is therefore suppressed and absent from their daily lives), his legacy still resounds in Berlin, Cologne and particularly in Rostock, Dresden and other cities of the east - strongholds of the extreme right movement Pegida.