The scene after a vehicular attack next to Beit Ummar on Friday morning. 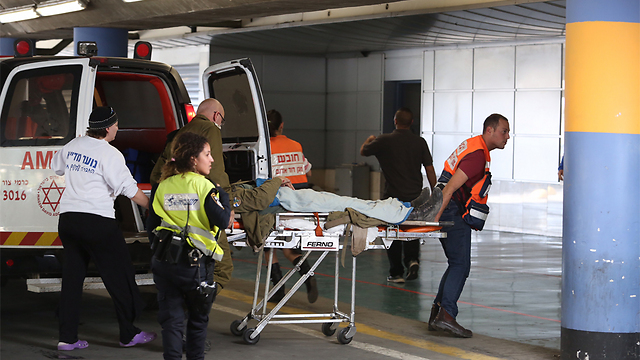 At around 12:30pm, a Palestinian rammed his car into IDF troops at the entrance to the Beit Ummar refugee camp near Kiryat Arba, south of the Gush Etzion junction, wounding four moderately and one lightly. Several of the wounded were taken to Shaare Zedek Medical Center in Jerusalem.

An initial investigation of the attack revealed that the IDF force which was struck was made up of two armored jeeps, and included the Shimshon Battalion's commander and the Kfir Brigade's operations officer. The troops were stationed on the road in order to prevent clashes from a nearby funeral for a terrorist from spilling onto Highway 60.

While the troops were operating on a narrow side road near the refugee camp, the terrorist sped towards them in his vehicle and managed to run over five of the soldiers. The brigade operations officer was very lightly wounded in the incident. The other troops opened fire at the vehicle and killed the terrorist, who was later identified as Omar ah- Zaakik, 19, from Beit Ummar.

Violent clashes broke out at the scene of the attack, where Palestinians were pelting stones and Molotov cocktails at security forces.

The scene of the attack at the entrance to Beit Ummar (Photo: United Hatzalah)

Around 7:30am, two soldiers were lightly wounded in a vehicular attack near Ma'ale Adumim after a Palestinian attempted to run them over at a bus stop near the settlement.

Witnesses say that the attacker's vehicle, rented in Ramallah the previous day, was speeding down the road from Jerusalem when he smashed into the bus stop where the soldiers were standing, hitting the concrete barriers placed there to stop such attacks.

He then exited the car and ran towards the soldiers wielding a knife, but dropped it. He was then shot and killed by a civilian who was at the scene.

The attacker was identified as Fadi Hassib, 30, from al-Bireh near Ramallah. Police and the Palestinian Health Ministry said he was the brother of a man who on Sunday had been shot dead in a similar incident nearby.

The vehicle used in the attack near Ma'ale Adumim (Photo: Police)

Members of a civilian search and rescue team who were coming back from a training session witnessed the attack and shot the driver, while another member of the team who works at Magen David Adom administered initial treatment to the soldiers.

The last Palestinian attack took place on Thursday morning, when a Palestinian attempted to stab a group of soldiers at the Tapuach Junction, and was shot dead.

Samer Seresi, 51, arrived at the major intersection in the Samaria region by car, and pulled over near a Border Police post. He then exited his car and ran at the troops while brandishing a knife. The troops, who spotted him, opened fire and killed him. None of the soldiers were hurt in the incident.

In the village of Qattana near Ramallah, a Palestinian was killed in clashes with IDF troops during an overnight raid. The Palestinian health ministry identified him as 21-year-old Yehya Taha. The IDF said Taha threw a Molotov cocktail at troops during the clashes, which led forces to shoot him.