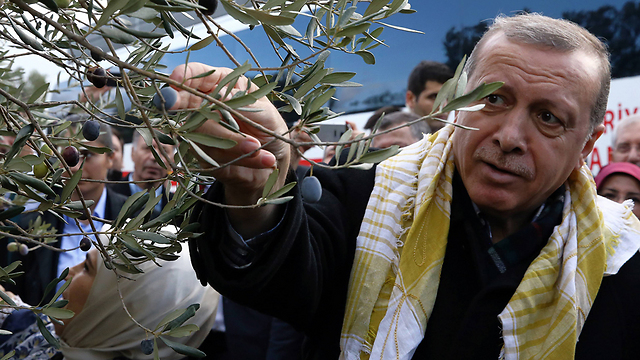 Analysis: Jerusalem dismisses Turkish president's hint at warmer ties, saying: 'We apologized and paid, the ball is in their court.'

Israel officially avoided issuing a response to Turkish President Recep Tayyip Erdogan's hint at warming ties on Monday, saying if the Turks wanted to normalize their relations relations with Jerusalem, then "the ball is in their court."

Officials in Jerusalem won't officially admit it, but they do enjoy watching Erdogan and the Turks sweat.

"We apologized and were ready to pay compensations. He should stop talking nonsense about the removal of the Gaza siege, because Turkey knows that there is no such thing, and we are not about to pay more for normalization," officials in Jerusalem said.

Diplomatic officials said that ever since the breakout of tensions over the downing of the Russian jet by the Turks, it seems that Ankara wants to normalize relations with Israel, and is especially interested in the natural gas plan which will see Israel establishing a pipeline from their fields to Turkey and other places in the world.

Turkey, like some officials in Israel, thinks that a rare opportunity has presented itself to bring an end to the conflict between the two countries. The Turks are isolated; they have managed to alienate Syrian President Bashar Assad, Russian President Vladimir Putin, and Egyptian President Fattah Abdel al-Sisi.

The Turks have been following the reports about Israel's growing ties with Greece and Cyprus over the natural gas plan with great concern. Prime Minister Benjamin Netanyahu is expected to host a summit with his Greek and Cypriot counterparts next month, which will revolve around the natural gas plan, and the possibility of installing a pipeline which would lead gas from Israel through Cyprus and Greece and on to Europe.

The Turks understand that if they don’t act soon they will lose both Israel's natural gas and the ability to renew strategic ties with Jerusalem, Israeli officials said.

But much like a Turkish bazaar, the Turks don’t like giving out gifts for free and think that they can push Netanyahu into a corner. This after they received an apology from Israel in March of 2013 over the 2010 Mavi Marmara raid, which claimed the lives of 10 Turks, and may receive as much as $20 million in payments to the victims.

They are really trying to squeeze an Israeli statement out of the deal, which would have Jerusalem promise to end its blockade on Gaza. Officials in Jerusalem on their part say that the Turks can "forget about it."

In recent days, rumors have abounded that Netanyahu sent an envoy to Turkey in order to conduct negotiations aimed at normalizing ties. Word spread on Friday that Foreign Ministry Director-General Dore Gold had flown to Ankara to hold secret talks with the Turkish foreign minister. But this rumor was quickly discarded after Gold was spotted shopping for Shabbat in Jerusalem.

Both the prime minister's office and the Foreign Ministry denied that an envoy had been sent to Turkey, but Netanyahu himself said during a hearing on the natural gas plan in the Knesset that he intended to send envoys on his behalf to both Turkey and Egypt to discuss the deal.

Israeli and Turkish energy companies are pushing officials in both countries to take advantage of the opportunity and normalize relations.

There is an understanding on both sides that one of the major facets of the breakdown in ties between Russia and Turkey is energy. Russia is Turkey's biggest supplier of gas and has threatened to halt its flow. Turkey sees Israel as a reliable and available source of gas, and this is a rare chance to end the tensions once and for all.

Israeli businessmen who are involved in the dealings say that, "The Turks long to end the conflict with Israel and move forward on the gas issue."

Even the American administration has recognized the potential and urged Netanyahu and Erdogan to move towards a diplomatic resolution and strengthen relations.

It was also revealed that the Americans pushed for Israeli Energy Minister Yuval Steinitz to attend an energy summit in Istanbul last month, which Erdogan was also supposed to attend. With that said, Steinitz, who said that he would not be against selling gas to Turkey, did not attend the summit.